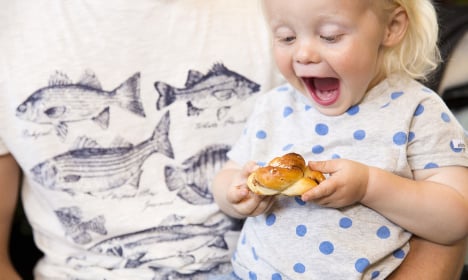 The modern cinnamon bun (kanelbulle) was created after the First World War. Although Sweden remained neutral during the four-year conflict, heavy restrictions were put on the import of several goods such as sugar, egg and butter as the country prepared for potential combat.

In the 1920s these products eventually returned to shelves and cinnamon buns began to appear in cafés and bakeries across the country. But the spicy ingredients – cinnamon and cardamom – were expensive and not everyone could afford to munch on the sweet rolls. A bakery in early parts of the 20th century. Photo: Scanpix

In the mid-20th century more cash was trickling into the Swedes’ pockets, mattresses and bank accounts, as a result of the Nordic country’s booming economy, and the average Swedish household suddenly found itself able to splurge on the pricey cinnamon bun ingredients.

While Sweden today may be at the forefront of breaking down gender walls and crushing glass ceilings, in the 1950s the housewife trend was still alive and well and the popularity of home-baked goods rose.

Though these days most can afford them, the buns are getting pricier: according to stats from Statistics Sweden (SCB) the cost of buying one from a cafe or patisserie increased by 74 percent between 1990 and 2015. Baking them at home isn’t as cheap as it once was either – homemade buns cost around 52 percent more than they did in 1990 thanks to the increasing cost of flour. Even the price of supermarket buns increased by 21 percent in the same period. 3. Its official ‘birthday’ is a relatively modern creation

The tradition of National Cinnamon Bun Day (October 4th) is not all that old. It was invented in 1999 when Sweden’s Hembakningsrådet (Home Baking Council) tried to think of ways to celebrate the organization’s 40th anniversary. Perfectly gauging the tastes of a nation, it announced the introduction of an annual feast day.

“We found that the cinnamon bun was the best symbol for Swedish home baking. I don’t think there are any Swedes who don’t like them,” its project manager Birgit Nilsson Bergström told The Local back in 2007. Anyone in the mood for a cinnamon bun? Photo: Per Folkver/AP

The cinnamon bun is a staple diet of the Swedish ‘fika’ tradition. If you’ve lived in Sweden for more than five minutes you are hereby given permission to skip this bit of the article – we bet you are well aware of this social institution.

While the French have their wine and the British their tea, in Sweden people stop what they’re doing to have a ‘fika’ at least once a day, often twice. This almost sacred tradition designates a moment to savour a cup of coffee and eat something sweet (very often a cinnamon bun), and it is factored into most people’s daily schedules whether they are at home, at work or running errands.

Thanks to a separate obsession with exercise, most Swedes avoid piling on the kilos at the same time. The fika tradition, and the cinnamon bun along with it, is going global, thanks to a growing amount of interest in Sweden abroad. A number of cafés offering Swedish-style cinnamon buns and black-as-the-night coffee have popped up around the world in recent years, including London, New York, Toronto, Australia and Singapore.

“Sweden is very trendy right now, and since ‘fika’ is a Swedish tradition that makes it even more cool,” Swede Anna Brones – co-author of the book ‘Fika: The Art of the Swedish Coffee Break’ published in the US in 2015 – told The Local that year.

In the British capital, Nordic Bakery specializes in all things Scandinavian buns, including traditional versions as well as their own takes.

6. But the tradition is more controversial than you might think

Despite being known for their generally active and outdoorsy lifestyle, the Swedes have a sweet tooth that extends not only to cinnamon buns. According to the Swedish National Food Agency, the average Swede eats on average 37 kilo added sugar a year, which has led to a big debate suggesting that politicians should introduce a tax on the sweet stuff.

In an opinion piece translated by The Local in May 2015, medical student Haroon Bayani called on the Swedes to give up on their adored ‘fika’ breaks to combat rising obesity figures.

“Just as in the 1950s when social norms dictated that smoking was ‘natural’, now these sugar-filled obesity-inducing cake breaks are completely acceptable,” he wrote, suggesting that cakes and buns be replaced with nuts or fruit. Have we convinced you to try to make your own Swedish cinnamon buns? Try The Local’s favourite recipe by food writer John Duxbury.