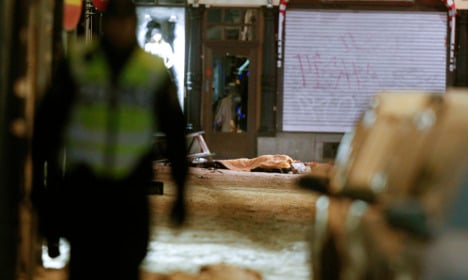 28-year-old Taimour Abdulwahab blew himself up in central Stockholm in December 2010. Despite being surrounded by people doing their Christmas shopping, no one else was killed.

“The Swedish suicide bomber was supported by al-Qaeda, they planned it all,” an intelligence officer named only as 'Major Amar' tells Swedish broadcaster SVT's investigative news programme Uppdrag granskning, set to be shown on Swedish television on Wednesday night.

Sweden's security service, Säpo, has previously said it believes Abdulwahab acted on his own.

It dropped its investigation into the only terrorist attack on Sweden's soil last year after investigators failed to trace a call the bomber received from Iraq – his former home country – on the day of the attack.

But Major Amar has now told Swedish reporters that Iraqi officers came to Sweden to help with the probe. He claims they also handed over information about the suspected caller to Swedish police.

“I don't know of any such contacts,” prosecutor Agnetha Hilding Qvarnström tells the 'Uppdrag granskning' programme, denying that Iraqi officers told her the identity of the caller, who Major Amar claims is a relative to Abdulwahab.

“He was fond of her. It's a person whom he has known since he was a child and she is older than he is,” he says.

It remains unknown whether or not the mystery caller had links to al-Qaeda, but 'Uppdrag granskning' also reports that a prominent leader within the terror organization, who is said to have been the Swede's main contact, was arrested two days after the Stockholm bombing.

Abdulwahab also met a military boss within al-Qaeda in Syria in 2010, according to the programme.

Säpo has previously said it could not establish a link to al-Qaeda during its four-year investigation into the incident. As well as researching the case from Stockholm, the agency also carried out investigations in the UK, where Abdulwahab had previously lived.

It was also unable at the time to confirm claims that the bomber had taken part in training at an extremist camp in either Iraq or Syria. All case files remain confidential.