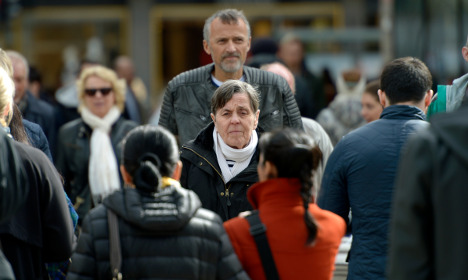 Swedes are among the tallest people in the world. Photo: Janerik Henriksson/TT

For every ten centimetres over one metre in height, the odds of developing cancer increased by ten percent in men and 18 percent in women, the research team reported at a medical conference in Barcelona on Thursday.

A Swedish woman 1.72 metres tall, for example, was about a third more likely to contract cancer than a woman of 1.52 metres.

Scandinavians are among the tallest people in the world. The average height of Swedish women is 167.7 centimetres while men are on average 181.5 centimetres tall, according to a Gothenburg survey released in 2013.

But there is good news. Another study released last week showed that cancer survival in Sweden continues to be far above that of other nations in Europe, with survival rates of 64.7 percent compared to an average 59.6 percent.

Thursday's findings, which have not been published in a scientific journal, support links found in other studies between height and elevated cancer risk – but the researchers said their work was based on the largest group of men and women yet.

“One [reason] is that taller people have a larger number of cells in their body, which could potentially transform to cancer. It could also be that taller individuals have a higher energy intake which has previously been linked to cancer,” Dr Emelie Benyi of the Karolinska Institute near Stockholm, who led the research, told the conference.

It was not clear if their findings would translate to people who live in different climates, with different diets and genetic backgrounds.

The findings, unveiled at a meeting of the European Society for Paediatric Endocrinology, looked at birth, health and military records of 5.5 million Swedes born between 1938 and 1991. The tallest was 2.25 metres in adulthood.

A United States study in 2013, done among only women, had found a 13 percent higher risk of developing certain cancers for each 10 centimetres of height.

The new research was met with some scepticism by outside experts who questioned the methodology, and stressed there was a much stronger cancer risk link with factors such as genetics or obesity.

Rather than tallness “causing” an elevated cancer risk, factors like growth hormones may be influencing both traits, they pointed out.

“It sounds an odd relationship at first glance, but it is actually very plausible that the risk of cancer in a person should be related to the number of cells in their body, since that determines the number of cells 'at risk',” Dorothy Bennett, a scientist at University of London said in comments issued by the Science Media Centre.

“A cancer arises by mutations from a single normal cell. Bigger people have more cells.”

Mel Greaves, a researcher at the Institute of Cancer Research in London, added: “Tall people shouldn't worry that they are destined to get cancer.”