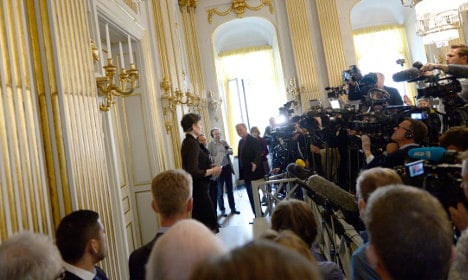 That's the end of our live coverage for today. Read more about Svetlana Alexievich, the 2015 winner of Sweden's Nobel Prize in Literature, here. Tomorrow it's time for the peace prize which will be announced in Oslo.

The Swedish Academy's Permanent Secretary Sara Danius has been speaking to global media in English about the decision to award the prize to Svetlanda Alexievich, with The Local's Maddy Savage among those in the media scrum surrounding her.

She repeated that the winner had simply said “fantastic” when telephoned about her win.

Asked why the Academy had chosen to give her the accolade this year she said: “Well, it is very simple, she is an extraordinary writer. What she's done, her true achievement is that she's offering us a literary chronicle of the emotional history of Soviet man (…) the Soviet individual, because it's not only men, but children, men and women.” Alexievich is only the 14th woman to be awarded the Nobel literarure prize and will take home the neat little sum of eight million Swedish kronor (around $950,000). Her books, controversially written in Russian, are not published in her home country of Belarus, long ruled by authoritarian President Alexander Lukashenko, amid what the author herself has described as “a creeping censorship”.

Here's the Permanent Secretary of the Royal Swedish Academy, Sara Danius, describing what happened when she called Svetlana Alexievich to tell her she had won.

When she finally understood who was calling her… #NobelPrize http://t.co/tuNloAPFiR

1.10pm Who is Svetlana Alexievich?

So, somewhat surprisingly one of the bookies' top runners for the Nobel Prize in Literature actually did win this year. But who is Svetlana Alexievich?

Well, she was born in 1948 in Ivano-Frankivsk, Ukraine, to a Belarusian father and Ukrainian mother. Today, she is based in Minsk. Her most famous work is a praised oral history of the Chernobyl disaster ('Voices from Chernobyl').

Permanent Secretary Sara Danius is telling reporters that she spoke to the writer earlier today and that she was pleased at winning the award. Apparently her exact comment was “fantastic”.

Svetlana Alexievich from Belarus has won “for her polyphonic writings, a monument to suffering and courage in our time.”

Five minutes left until the 2015 winner of the Nobel Literature Prize is revealed. All eyes are on Sweden and The Local is there at the press conference in Stockholm.

5 minutes to go. Commencing countdown engines on. #NobelPrize in Literature 2015 to be announced within shortly. pic.twitter.com/a9u8h0iuiM

Fun fact: it's become a bit of an unofficial tradition to yell 'äntligen!' (or 'at last!') when the winner is announced. This was started by Swedish journalist Gert Fylking in the late 1990s and was a tongue-in-cheek way of making fun of the fact that the Nobel Prize winner (let's be honest) very often is somebody very few people have every heard of.

Fylking was eventually banned from attending the announcement by the then Permanent Secretary Horace Engdahl, but if you listen hard you can usually hear someone, somewhere in the audience shouting it when the winner is revealed.

It was hot inside as she sat engulfed by chatter from Japanese, British and of course Swedish media. #NobelPrize pic.twitter.com/c0ckjDsyFv

12.34pm Journalists have flocked to Stockholm

There appear to be far more journalists here than at the other Nobel announcements this week. Among them is Maria Domellöf Wik, a literary editor from the Gothenburg Post.

She is hoping that Svetlana Alexievich from Belarus will win the prize. The writer briefly worked for the newspaper on Sweden's west coast. Wik said it would be 'excellent news' for the publication if she won.

“But that's not why I want her to win,” she told The Local.

Wik said that she usually watched the announcements online at her office, but wanted to be in Stockholm to see Sara Danius in action. As we mentioned earlier, she is the first female Permanent Secretary of the Royal Swedish Academy, which dishes out the Nobel Literature prize. Only two people have declined the Nobel Prize to date. One was Vietnamese politician Le Duc Tho, who was awarded the 1973 Nobel Peace Prize jointly with US Secretary of State Henry Kissinger.

The other was French author and philosopher Jean-Paul Sartre, who declined the prize because he had consistently refused all official honours. Swedish Academy member Lars Gyllensten wrote in his memoirs that the writer had later been in touch asking for the award money to be sent to him.

Finally she stepped headed up the stairs to a room packed with reporters and lit by giant chandeliers. #NobelPrize pic.twitter.com/svdUsICDmk

This is the former Stock Exchange building ('Börshuset') in Stockholm's Old Town, where the Swedish Academy meets and where the 2015 Nobel Prize in Literature is set to be announced in less than an hour. Quite pretty, no?

The bells are ringing outside #SvenskaAkadamien #Stockholm where #NobelPrize in #Literature will be announc… https://t.co/ww8rQBdWCr

Here are some more interesting facts about the Nobel Prize in Literature.

– There are around 200 nominations, which are whittled down to a shortlist of five.

– There is a great deal of secrecy behind the process, the details of which aren't released for 50 years.

– The winner just needs a majority of votes, it doesn't need to be unanimous.

– The laureate is notified 30 minutes before the announcement.

At around noon, @TheLocalSweden's Editor strolled to the #NobelPrize venue through the cobbled streets of #Stockholm pic.twitter.com/TvaFIPSmYK

After collecting her press pass, she ate a cinnamon bun in the square outside the Royal Swedish Academy #NobelPrize pic.twitter.com/qj5eLlAUBf

The literature award is handed out by the Swedish Academy (Svenska Akademien). The Academy, which was founded by King Gustaf III in 1786, has 18 members who are elected for life. They spend the whole summer reading up on the entire works of five shortlisted authors, before voting in a winner.

The Academy is chaired by the so-called Permanent Secretary, Sara Danius, a literature and aesthetics scholar who was appointed this summer. This will be her first Nobel Prize announcement.

When the group does not pick the Nobel Prize winner, it works to “advance the Swedish language” by for example putting together an annual dictionary. It has hit the headlines in the past year for scrapping controversial term 'negro ball' for a Swedish chocolate sweet and introducing gender neutral pronoun 'hen'.

Permanent Secretary Sara Danius, who will announce the #NobelPrize in Literature, 1ST woman on this position: pic.twitter.com/Q9Vy2mpa2j

The Nobel Prize in Literature is one of the most famous of the Nobel awards and probably the most prestigious accolade available to writers. It has been handed out 107 times so far.

Rudyard Kipling, who wrote 'The Jungle Book' (no, the novel, not the Disney movie), was the youngest recipient. He was 42 years old when he claimed it in 1907.

Last year we saw the award go to French author Patrick Modiano. Click here to brush up on the five things you need to know about him. It's a gorgeous autumn day in Stockhom today, after a night of stunning Northern Lights in the Swedish nights skies. Our Editor Maddy Savage is clearly channelling her inner Nobel author on the day of the Literature awards.

The sky was dazzling and the leaves were dancing as the wait began for the #NobelPrize in #Literature #2015 #Sweden pic.twitter.com/XDvvlkbBSl

11.20am Another Nobel day begins

Hello all and welcome back to the fourth day of Sweden's Nobel Prize week. If you haven't been following The Local's coverage, you can click on the links here for our reports on who won the awards in Medicine, Physics and Chemistry.

Today we open our books on literature, the prize that is arguably the most hyped. The betting is already on, with names of potential winners including Americans Joyce Carol Oates and Philip Roth, Belarus writer Svetlana Alexievich and Japan's Haruki Murakami.

Live blogging the announcement at 1pm for you today is The Local's Deputy Editor Emma Löfgren. Keep an eye out for our Editor Maddy Savage on Twitter as well, who is on her way to the press conference in Stockholm, where the general public have already started to gather.

Media and the general public is gathering outside the Swedish Academy #NobelPrize in Literature today 1 p.m (CET) pic.twitter.com/nkQYEPiEV5