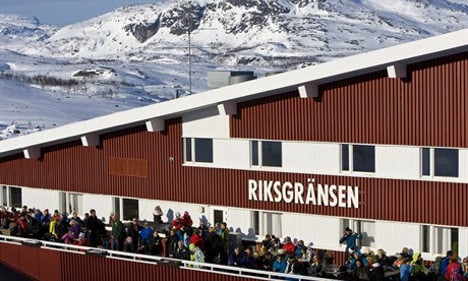 Riksgränsen in northern Sweden. Photo: Mattias Johansson/Wikicommons
Riksgränsen, which sits 200 kilometres above the Arctic Circle close to Sweden's border with Norway, is set to welcome the refugees following a deal between the resort's owner and the Swedish Migration Agency, Migrationsverket.
“As everyone knows, there is a refugee crisis in the world. Now asylum seekers are arriving in Sweden and Migrationsverket has a major urgent need to find temporary housing to accommodate all those who need help. We at Lapland Resorts AB are very pleased to be able to help,” Sven Kuldkepp, CEO of Lapland Resorts, told Swedish newspaper Norrbottenskuriren via email on Wednesday.
“Why leave it empty and cold when it can be quite full and warm,” he added in a separate comment.
Kuldepp explained that the refugees would be allowed to stay in Riksgränsen until February 2016, when the main tourist ski season would get under way.
He said that the plan would “not affect our ordinary activities” but added that he hoped that his resort would also be able to create jobs for some of the asylum seekers.
The move comes amid a push from Sweden's Social Democrat-led government to encourage municipalities across Sweden to take in more refugees.
At the moment, the vast majority of asylum seekers end up in either Stockholm, Gothenburg or Malmö.
But Northern Sweden is becoming a more common base for asylum seekers. On Friday a group of 19 Eritreans landed in Luleå and were taken to Östersund as part of the first phase of a programme to relocate tens of thousands of refugees within the EU.
However some campaigners have raised concerns about people raised in Africa or the Middle East adapting to the dark and freezing conditions in the region.
In January, a group of refugees taken to a housing centre near Östersund initially refused to get off a bus after claiming that they had been told by officials that they would be living close to Stockholm and instead finding themselves driven 15 hours north.
“We were coming to an area in the middle of the forest we know nothing about, just snow and wind and nothing else,” Esam Taha, 36, from Syria, told The Local this week, reflecting on the chaos.
“It was terrible, just wind and snow, and the roads were slippery. The moment we got out of the bus we slipped and fell down,” he explained.
But the asylum seeker says he now expects to settle in the area and argues that other refugees might not find it too tricky to adapt to the frozen north.
“If I find an apartment in Östersund, of course I will stay here, because all my friends are here, all my Swedish friends are here. This city is a small city and a quiet city, and the people here are really really nice and I like it, but it's a big problem to find an apartment,” he said.
Taha added that he was studying at a riding and hunting centre and volunteering at a school while he waited for his residency to be approved.
More refugees have sought asylum in Sweden so far in 2015 than in any other year in the Nordic nation's history, new figures released by the country's Migration Agency revealed on Monday.
86,223 people have launched cases, surpassing a previous record set in 1992 when 84,016 people sought asylum following fighting in the Balkans.
Officials in the Swedish capital announced on Monday that they were planning to build a new refugee reception zone around the city's central station, while Prime Minister Stefan Löfven said last week that tent camps would likely be needed in order to provide enough shelter for new arrivals reaching Sweden as the winter sets in.