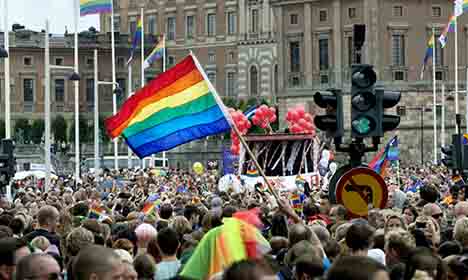 The Eurovision Song Contest will be held in Stockholm in the middle of May next year. The last time it took place here was back in 2000. A lot has happened since then, both in the contest and in Europe.

The Eurovision Song Contest has been growing in both size and popularity, especially among LGBTQ (lesbian, gay, bisexual, transgender and queer) people. During this time, Europe has also developed its view on LGBTQ people, and in most cases this has resulted in improved rights and a higher level of positive visibility of the community.

However, the development has not only been positive. We at RFSL Stockholm (the Swedish Federation for Lesbian Gay, Bisexual and Transgender Rights) are constantly being told stories by the media and by LGBTQ people who have fled to Sweden of persecution, hate, discrimination and injustice in their home countries – only because of their sexuality, gender identity or gender expression.

In countries such as Serbia, Lithuania and Hungary it can be directly dangerous to be openly LGBTQ. In Russia there are now laws that ban ”homosexual propaganda” directed towards children and young people, which in reality has meant a prohibition against positively portraying LGBTQ people in the country.

There are a lot of things to work on in Sweden as well. A continuous high frequency of hate crimes, discrimination and exclusion is part of the explanation to why attempted suicide rates are comparatively higher among LGBTQ youth than among the general population.

During the Eurovision Song Contest, Stockholm will be filled with people from all over Europe, among them a lot of LGBTQ people. For many, the contest works as a 'free zone' and a hub for music, culture and meetings between people from all over the world. RFSL Stockholm thinks that it’s the responsibility of the City of Stockholm to give these people an opportunity to be who they are and not hide their identities from the surrounding world.

We therefore encourage the City of Stockholm to offer LGBTQ people a safe and open meeting place during the contest. It could offer parties, contacts with organizations and companies with activities directed towards LGBTQ people, and also performances and interviews with delegations from participating countries.

To realize this idea would not only strengthen Europe’s image of Stockholm as a city that welcomes people irrespective of their sexual orientation. It would also encourage future host cities of the Eurovision Song Contest to include LGBTQ people as one of their most important target groups, in order to make the experience as good as possible for everyone.

Stockholm now has a unique opportunity to set the standard for future Eurovision events and show the rest of Europe that the life, rights and opportunities of LGBTQ people are something that all countries should prioritize. We hope that the city takes this chance and that we in cooperation with each other can find forms to offer the safety and openness that all people deserve.

Julle Bergenholtz is the vice chairman of the Swedish Federation for LGBT rights in Stockholm (RFSL Stockholm). A Swedish version of this article was originally published on Metro.