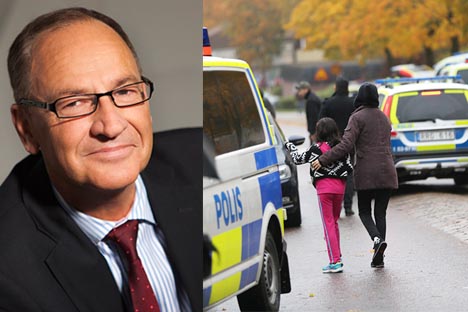 Bo Jansson, left, and a mum with her daughter outside Kronan school in Trollhättan. Photo: Lärarnas riksförbund, Björn Larsson Rosvall/TT

The school should be an open space, but not an unprotected one.

Lärarnas Riksförbund (The National Union of Teachers in Sweden) demands that the working environment be given priority and security strengthened in schools across the country.

After the horrible tragedy in Trollhättan on Thursday, where three people were killed and two injured in an attack at Kronan school, I have great feelings of emptiness and sorrow. I want to express my support to all those affected by the violence.

Flags were flying at half-mast outside the local council's headquarters. On Thursday evening, when I put flowers by the school and talked with union members and staff, the feeling of disbelief was strong.

This was not because Sweden had never been hit by school attacks before; in fact incidents have been increasing over the last few years. But never has there been an attack of this enormity.

I think that schools must be open to society. I would prefer not to see metal detectors or security guards in our schools.

But it shouldn't mean that just anyone should be able to walk into a school building.

In most workplaces, people use keycards; their offices are not open to anyone. We need to have a safe place of work for both teachers and pupils. We must prioritize their working environment.

This is an attack not only against the ones affected directly on Thursday. It is also an attack against the safety and security in Swedish schools that we have been so proud of.

Teachers and pupils have the right to be in a secure and safe working environment. How could we otherwise have an open society?

We have seen and heard of horrible school shootings and attacks, especially in the US, but it gets so much closer and more obvious when it happens here, at a Swedish school.

To lose or have a family member, colleague or pupil injured in an attack like this is something that should not happen.

If the police’s information given on Friday is correct, that the attack had a racist motive, we have entered a new phase. The hatred has been visible for a long time in Sweden, but we are now facing its ultimate consequences.

We teachers and others in the school have, for a long time, warned against the growing intolerance and fear.

All good forces must now unite.

I now hope that we can all gather against the hatred and violence, and that everyone understands the need of a school that creates a safe atmosphere. A school where curiosity and a thirst for knowledge – but also friendship, laughter and warmth – will be given priority.

For that to happen, we all need to take responsibility for the current social climate. Do not let the hatred or violence win – whether directly or indirectly by forcing us to abandon our open society.

But let us also create a safe and secure working environment for teachers and pupils.

We in the National Union of Teachers now demand that all Swedish municipalities and private schools look over the security of their schools.

The fact that anyone can walk into the biggest workplace in Sweden without being controlled must now unfortunately be considered as a thing of the past. We now have to rethink. The school has to be a safe place, for pupils as well as for staff.

Bo Jansson is the chairman of Lärarnas Riksförbund. A Swedish version of this article was originally published on SVT Opinion.