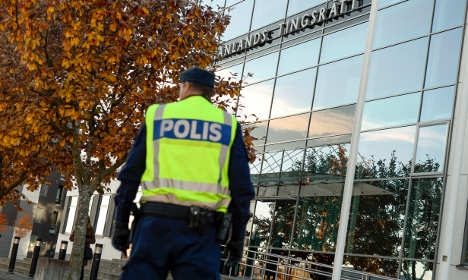 Police outside a Västerås court on Wednesday. Photo: Pontus Lundahl/TT

Police and security guards were present at Västmanland district court to search everyone entering the court room where one of Sweden's most high-profile trials this year is being held.

“Amid today's debate in society about hostility towards refugees it feels pretty natural that you check those who enter,” Per Kjellson, head of the court, told TT.

The court heard on Wednesday morning that Eritrean man Abraham Ukbagabir admits stabbing the pair in the furniture giant's kitchen section on August 10th, but says he did not mean to kill them.

“He denies responsibility for the murder. He admits, however, to aggravated assault and manslaughter,” defence lawyer Per-Ingvar Ekblad told the trial.

A mother, 55, and her adult son, 27, died in the stabbing at the Ikea mall in Västerås.

The moment of the attack was not caught on camera, but CCTV footage forming part of the police investigation shows Ukbagabir grabbing two knives from a shelf and unpackaging them.

Prosecutor Eva Morén said in her opening statement on Wednesday that the 36-year-old then forcefully stabbed the 55-year-old woman in the abdomen, which “almost completely severed the aorta”. Abraham Ukbagabir with his lawyer and interpreter. Photo: Pontus Lundahl/TT

The Eritrean had been handed a deportation order on July 27th and had again been told to leave Sweden by immigration officials shortly before the attack.

He told the court he lost control when he understood he would be forced to leave the Nordic country.

“I used to regard Sweden as my country. Then when I had this thought and got rejected I had to try to defend myself,” said Ukbagabir via an interpreter.

His initial plan had been to attack people in central Västerås, but he took the bus to Ikea with a friend – who was not involved in the killing – when he failed to find any knives.

The court was set to continue hearing witnesses throughout the day.