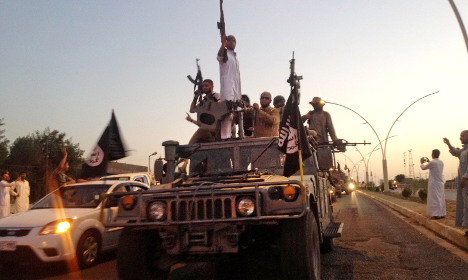 Now eight months pregnant, the teenager travelled with her 19-year-old boyfriend to Syria earlier this summer, where he is said to have joined an extremist group with links to al-Qaeda.

The girl, who is from a small town in southern Sweden, was then captured by troops representing militant organization Islamic State (also known by several names, including Isis and IS). An international search warrant was issued for her boyfriend, suspected of kidnapping.

According to TV4, its sources in Iraq have now said she was freed by a Kurdish group on Wednesday morning. The group is said to have entered Isis-controlled territory in the city Tall Kayaf, north of Mosul, where she had spent the past weeks.

The operation was carried out with the approval of the girl's relatives. Reports said there was no gunfire and nobody was injured.

The 15-year-old is currently in a secret location in the region.

While the circumstances of the teenagers' visit to Syria remain unclear, their situation followed a rise in young people making the journey from Scandinavia to the Middle East to join radical groups such as Isis.

Swedish Security Service Säpo said earlier this month that up to 300 Swedes are believed to have travelled to the region to fight in the past three years. Around 40 are thought to have died in battle and around 125 currently remain in Syria and Iraq – 90 men and 35 women.

In May, Magnus Ranstorp from the Swedish Defence University told The Local that while some women and teenagers were persuaded or forced to travel to the Middle East by friends and family members, others “look up to the fighters like pop stars” and leave home of their own accord.

More than 220,000 people have been killed in Syria's four-year war, which is increasingly dominated by jihadist groups.