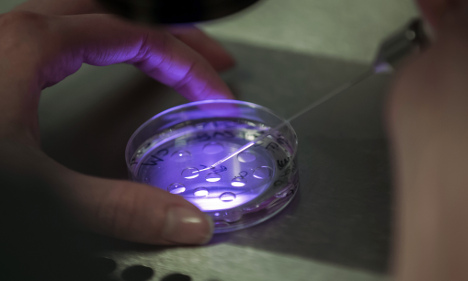 The woman gave birth to twins in December 2012 after she and her then husband agreed she would undergo IVF treatment (in vitro fertilization) in Latvia, using two embryos and sperm from other donors.

Under Swedish law, this meant that the man consented to being equal to a biological father in terms of parental rights and responsibilities.

But after the twins, who are now three years old, were born, he said he had only given permission for one embryo to be implanted and that he had not agreed to fathering two children. Meanwhile, the couple split up.

Following a long legal battle through several courts, Sweden's top legal body in the country, the Supreme Court, on Thursday upheld an original decision by Malmö District Court to deny the man's request to have his paternity revoked.

“This case is the first of its kind considered by the Supreme Court and the circumstances are somewhat special. But this type of case can be expected to become increasingly common as medical knowledge evolves,” said Supreme Court judge Svante O Johansson in a statement.

Sweden is known for its gender equal view on parenting, with mums and dads entitled to at least two months parental leave (although it's often referred to as 'the daddy months'). Both parents are encouraged to share custody of the child after a divorce.

In the same spirit, the Supreme Court ruled that it was in the twins' interest to have a father and said that anything else that had been agreed by the pair before the IVF treatment should only in exceptional circumstances render their original deal null and void.

“The consent in question means that the man had also expressed to the children a willingness to take on the legal responsibility as a father, and because there are no circumstances which mean the consent should not be 'in effect' the man should be considered the father of the children,” added Johansson.

Because the success of IVF is low, it is generally the case that more than one embryo is implanted, on the assumption that one or more will fail to result in a live birth. The court added that the father should have understood that a twin birth could not have been ruled out.