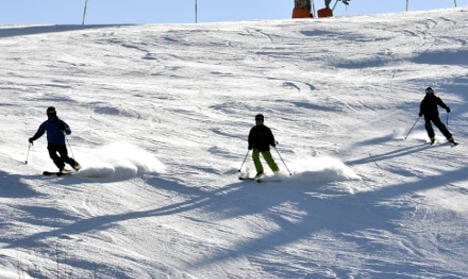 Could Hammarbybacken in Stockholm soon be without any natural snow? Photo: Hasse Holmberg/TT

It might be getting chillier across much of Sweden, but snapping on skis is set to become increasingly difficult in parts of the country, which are predicted to get less and less snow in the coming decades.

Climate researchers at Sweden’s main weather agency, SMHI, have been analysing snowfall in Svealand (in southern central Sweden) and predict that popular resorts including Isaberg, Yxbacken, Säfsen and Kungsberget, as well Hammarbybacken, the manmade slope in Stockholm, could be without any thick snow by the end of the century.

“According to our climate scenarios, the most dramatic changes will be in Svealand and along the Norrland coast, where the snow season may be shortened by a few months,” weather analyst Erik Kjellström told Swedish broadcaster SVT on Monday.

SMHI’s data show that the snow season across much of the area is already two weeks shorter than it was 50 years ago, rising to three weeks in Småland, Närke and Östergötland.

The further reduction in the white stuff is set to take place as Sweden warms up as a result of climate change.

While average global temperatures are set to rise by between 0.5 and five degrees celcius over the next 75 years, researchers predict that they could go up by between two and nine degrees in the Scandinavian country.

“There will be a greater likelihood of rain instead of snow,” Kjellström told SVT, adding that Sweden’s famously “really cold winters” could get a lot milder.

However his team argues that the reduction in snow and sleet in the Nordics will depend greatly on future greenhouse gas emissions around the world –  a topic that is set to be hotly debated in the coming weeks, ahead of the UN climate change conference in Paris.

The goal of the gathering at the end of the month is to reach a new international agreement, applicable to all countries, with the aim of keeping global warming below 2C.

SMHI researchers say that if this is achieved, there could be better news for snow sport lovers.