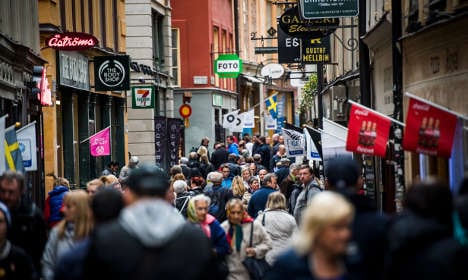 Sweden has been named the world's fifth most prosperous nation. Photo: Nora Lorek/TT

In the 2015 Prosperity Index, released by the Legatum Institute on Monday, the Nordic nation was ranked fifth in the world, finding itself outperformed by its Nordic neighbour Denmark in third place and Norway which claimed the top spot.

However, the report's authors said that Sweden's place in the top-five masked an underlying decline in its performance on the economy – one of eight factors used to rank the world's countries.

“The Prosperity Index shows that the Nordics are prosperous places, however, prosperity cannot be taken for granted and without robust job growth the Nordics will struggle to remain at the top of the pile,” the report's authors wrote.

Sweden ranked seven on the economy, down from five in 2012, largely credited in the report to failing to bring unemployment figures back to pre-financial crisis levels.

“While many other advanced economies have made progress on the Economy sub-index since 2009, the Nordics have been going backwards,” the institute wrote in its report. “Data from the Prosperity Index can pinpoint the primary source of the Nordic malaise. The countries are being let down by their poor labour market performance.”

“Early retirement is one of the main, but not the sole, tactics used in the Nordic welfare systems to hide true unemployment,” Sanandaji writes. “Another example is that unemployed individuals participate in labour market programmes with limited prospects of gaining employment, or are excluded from the labour force for various reasons.”

The institute argued that the 'Anglo-Saxon' labour market model seen in the UK and the US seemed to be doing a better job of creating jobs after the financial crisis.

Swedish Prime Minister Stefan Löfven, who heads up the country's centre-left Social Democrat-Green coalition, has previously pledged to focus on job creation to achieve his goal of Sweden having the lowest unemployment rate in the EU by 2020.

The Local has contacted the government's labour market ministry for a reaction to the Prosperity Index findings.

Elsewhere in the Legatum report, Sweden's ever-vibrant startup scene put the country top in the world for 'entrepreneurship and opportunity', with 79.2 percent of respondents saying it was a good place to start a business, compared to a global average of 70 percent.

A total of 94.8 percent said they believed people in Sweden could get ahead by working hard, compared to an 80.3 percent global average.