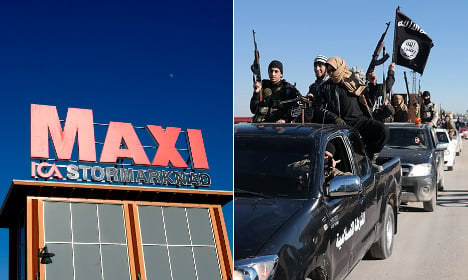 It donated one percent of its total revenue on a particular day to the organization and also pledged to hand over one percent of the sales of a pastry specially baked for the occasion.

“Help us to help,” read a message published on its Facebook page, next to a picture of the store workers raising their index fingers in the air to symbolize one percent.

A similar gesture is sometimes made by practising muslims, to show they believe in one god. But after pictures emerged from the war in Syria showing fighters making the sign, it has come to be incorrectly assumed by some to be a symbol of the Islamic State terror group (also known as Isis or IS).

Now, you would be forgiven for thinking that there is quite a leap from militant extremism to fundraising for a women's shelter. But apparently not. Some Swedish shoppers complained after being convinced that the store was backing terrorists.

“Frightening that an Ica store supports IS terrorists,” one Facebook user hit out. “Find out facts before you advertise something. Wake up!” another wrote angrily.

Eventually the Ica Maxi store was forced to respond on its page, writing: “Our finger symbolizes one percent. We absolutely don't have anything to do with IS at all. Have a nice weekend.”

The store had raised more than 80,000 kronor by Wednesday, after the story went viral following an article in regional newspaper Kvällsposten, which broke the story.

Store manager Thomas Börjesson told The Local that the accusations had “saddened” him and his staff, but declined to comment further, saying he wished to put their surreal social media fame behind him.

It is not the first time that people with no radical beliefs have been mistaken for Isis members in Sweden. In February a girl who hung balloons in the shape of the number '21' for her birthday was paid a visit by officers who thought the shapes stood for 'IS' and had been put up by supporters of the extremist group.

And last month the leader of a society of bearded Swedes told The Local of the bizarre moment he and his group got a visit from police after passersby confused them with radical terrorists.