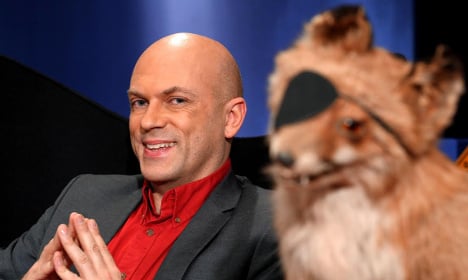 Foster says that when he first arrived in Örebro in central Sweden, as a Briton he was “something of a novelty”, and locals were “curious and friendly” when they heard his accent.

He had taught himself basic Swedish through cassette tapes before the move, and on arrival began a three-month Swedish For Immigrants (SFI) language course. But the thing he says really made a difference when it came to breaking through the language barrier was a stint working as an assistant nurse in a retirement home.

“None of the residents spoke English so I was forced to use my newly-learned language skills. It wasn't always plain sailing, though. One old gentleman got so cross at my attempts to explain there would be cucumber in his sandwiches that he hit me with a diaper. An empty one, thank God.”

“But I think that was crucial,” says Foster. “To master a language you have to use it. So landing in a situation where English won't help you is really, really useful.”

Having got to grips with Swedish, Foster was able to move into the media industry, starting out working in the international section of Radio Sweden on programmes about sport and pop music.


Meeting a whole family of Fosters in the Philippines for the TV series Family Foster. Photo: Markus Rosen

He moved on to a local radio show called Lunchbreak, one of the first digital self-run shows in Sweden.

“As presenter, I ran all the music and jingles myself – the only problem was that the new digital system was not as reliable as hoped,” Foster explains.

“Once I sat there and the system crashed, leaving me to fill two hours with no music… there were a lot of weather updates that day!”

He then scored a role in the television industry, hosting a chat show called Living Room.

“It gave me so much scope to be creative. We had three guests from different walks of life who had the chance to ask each other questions.”

“For example, in one episode we had a British heart surgeon who published his own poetry, a Polish supermodel and Sweden's favourite pianist, Robert Wells. They were all fascinated by each other's work, and that was the kind of mix I loved.”

Foster has also worked on a quiz show, Big Words, which saw Swedish celebrities pitting their knowledge of English against each other, and a series called Family Foster which gave him the opportunity to travel the world, tracing how English has become a global language.


Keith on the set of Big Words. Photo: Erik Amkoff/UR

More recently, Foster has focused on his writing, including stage and television scripts, as well as being involved with Stockholm-based English theatre group SEST.

When it comes to differences between Swedish and British working cultures, Foster praises the lack of hierarchy in Sweden, saying: “I like that titles don't always mean so much, and that a CEO is often open to chat with anybody in the company. On the other hand, I don't like the ‘hidden’ hierarchy that sometimes grows in its place.”

The media industry, which in the UK is often seen as competitive and nepotistic, is more open in the Scandinavian nation. “You can break into the media here at a young age,” says Foster. “The problem then is that you can get stuck in being employed on a contract basis, and as soon as the company has to offer you a permanent job they take on a new youngster in your place.”

Foster adds that falling advertising revenue and competition from streaming services, computers and smartphones have had an adverse affect on television. “Lots of programmes are made on a shoestring budget and people are expected to work long hours for very little, unless it's one of the few big-budget productions.” “For some strange reason, there's a view among some that if you're working with something you enjoy, like acting for example, then you shouldn't get a decent wage for it,” he says, adding that finding funding and publicity is competitive due to small audience numbers in Stockholm compared to London or New York.

“But the good thing is that people still want to do things, to put on plays or exhibit art, so they carry on the fight. But it's not easy and people put in lots of hours of their own time.”

As for the difference between Brits and Swedes on the other side of the screen, Foster has made a few observations. “British audiences laugh louder but Swedish audiences are more forgiving. And they understand the texts better!”

“The best audience is a mixture,” says Foster.

After three decades in the frozen North, Foster is still finding joy in his work, and is currently performing the title role in SEST’s production of Macbeth, which opened at underground venue Musikvalvet in Stockholm on November 13th.

While he admits there are “not quite as many laughs” in this show as in some of his earlier projects, he is enthralled by the underground stage on which the show is being performed.

“I can’t wait!” he told The Local, just before the curtain went up for the first time.