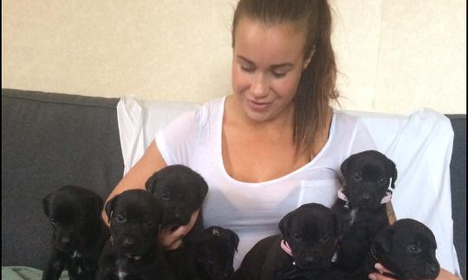 However, just nine weeks later, Marie’s dog, Bellie, a Rottweiler bitch, gave birth to seven puppies. Astro, Sofie’s male hunting dog, had somehow managed to circumvent the partition between him in the trunk of the car and Bellie who was in the back seat.

Marie Strinnholm takes up the story, which went viral in Sweden on Monday.

“We were sitting in the sun having lunch when one of our friends asked us if we’d left the dogs together in the car,” she told The Local.

“It was a warm summer day so we had left the dogs in Sofie’s car because she can open her trunk to let the air in.”

“We knew Bellie was in season but there was a grid separating her from Astro so we didn’t think there would be a problem and we told our friend this.”

And then he said, “Well, stranger things have happened.”

“So we got a little worried that something might have happened in the car so we went out just to check up on them,” Marie continued.

“And then we found that Astro had somehow, only God knows, managed to get to Bellie in the back seat. And they were both sitting there looking very satisfied.”

Marie and Sofie still weren’t sure that anything had happened between the dogs so they forgot about it.

“Then a few weeks later it was clear something had happened. Bellie was looking like a little barrel,” Marie said. “So we took her to the vets and he confirmed that she was pregnant.”

“We decided that we would see the pregnancy through and we would cooperate. So me and Bellie moved in with Sofie and her boyfriend Lars. And then on September 29, seven little puppies were born.”

“At first we were thinking about giving them names like Chernobyl or something, because they were disasters. But then it felt wrong. These sweet little puppies were somehow the most beautiful accidents that could ever happen. So, that’s why we named one of them Shit Happens. Of course, the new owners can change that one’s name if they like!”

And what about the parents?

“Astro and Bellie have known each other for two years and are like a little love couple.”