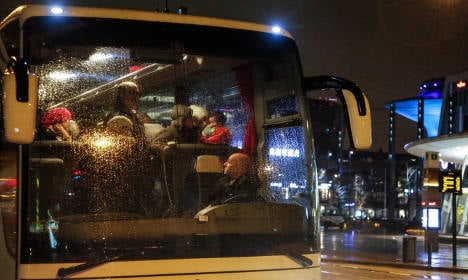 Speaking at a press conference on Tuesday afternoon, Löfven said Sweden would be handing out residence permits to no more than the “EU minimum level” of refugees.

The new measures are:

• The Aliens Act will be adjusted so that Sweden will only offer temporary residence permits to those refugees they are obligated to help according to European Union and United Nations rules and conventions. This will apply for three years.

• The right to family reunification will be subject to a very strict time limit.

• The ages of all unaccompanied children will be medically verified.

• All new asylum seekers will be given temporary residence permits only, a major change from previous policies which included permanent permits. Exceptions will be made for children and families who registered before the new rules were announced.

• ID checks will be enforced on all modes of public transport to Sweden, which is already the case for ferries from Germany. Train staff were to be tasked with carrying out the checks. It remained unclear on Tuesday evening whether this would take place on the Danish or Swedish side of the border.

The ID checks are unlikely to affect people travelling from Syria, who usually have passports. However, experts said more refugees coming from African countries were likely to be turned away at the Swedish border unless they were able to present identification documents. The move spells a dramatic U-turn for the Nordic humanitarian superpower, which has previously said it would do anything possible to aid people fleeing armed conflicts in the Middle East and Africa.

And public and political opinion was split in Sweden after the shock announcement, with some saying the new rules were too strict and others calling it too little, too late.

“I am worried it is not enough,” said Anna Kinberg Batra, leader of the biggest centre-right opposition party the Moderates, who nevertheless welcomed the temporary, rather than permanent, residence permits.

However, Left Party leader Jonas Sjöstedt tweeted: “Sweden was a light in the darkness for many forced to flee. That light goes out now. People fleeing will be hit hard.”

The Swedish branch of charity Save the Children told the TT news agency it understood the government was under pressure, but criticized the new measures.

“Children become pawns in a political battle, where other EU states don't take their responsibility,” said Sweden head of the organization Ola Mattsson.

Kent Ekeroth, spokesperson for anti-immigration party the Sweden Democrats, meanwhile told the newswire: “This is far too little and comes far too late.”

Löfven, leader of the centre-left Social Democrat party, spoke alongside Åsa Romson, Deputy Prime Minister and one of the heads of the government's junior coalition partner, the Greens, at Tuesday's press conference.

One of the architects behind Sweden's hitherto generous asylum policy, Romson was visibly upset, choking back tears at one stage.

Before announcing the measures, the Prime Minister told reporters, “It pains me to say that Sweden is no longer able to accept the high number of asylum seekers we're seeing today. (…) The situation is unsustainable.”

Löfven was very critical of other EU countries who he felt were not taking equal responsibility for the refugees, adding: “Now we must show that we can do no more. (…) We must create breathing space for the Swedish asylum system. We must get people seeking asylum to apply to other countries.”