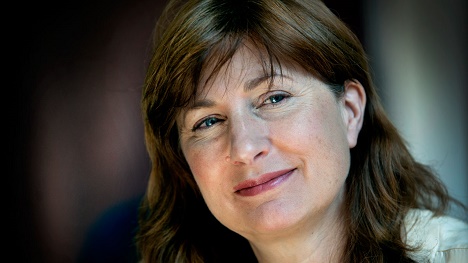 The SUP46 award was created just a few years ago, and the current members of the Hall of Fame are Daniel Ek, founder of Spotify, and Niklas Zennström, founder of Skype and Atomico. The award is given to people who, through their actions and personality, have made an exceptional contribution to the Swedish startup scene.

Niklas Zennström attended the event to hand over the trophy to Hall of Fame newcomer Jane Walerud.

“Jane Walerud has been a forerunner and inspiration for the startup ecosystem, and we are grateful for everything she has done to help early-stage startups in the community,” Jessica Stark, CEO and co-founder of SUP46, stated at the event. “She is also a great role-model in the continuous work to get more women both funding and founding new exciting startups.”

American-born Jane Walerud has been a driving force in the Stockholm startup world for the past 15 years, and has become one of Sweden's most high-profile investment angels.  She was the first external investor in Klarna. She is also a member of the Swedish Council for Innovation, along with Damberg.

Walerud tactfully deflected the spotlight, commending the people she works with for her success. “It's never my idea,” she remarked. “I team up with people, and we drive it together.”

But it was also an honour, she said, to be selected.

“I hope I can inspire other women from around the world to go for a career within entrepreneurship; it is exciting, profitable and educational,” she said.

Sweden's Innovation Minister Mikael Damberg did not attend the event, but honoured Jane Walerud with a statement on Thursday evening.

“I would like to offer my congratulations to Jane Walerud,” the minister stated.

“Jane is one of the driven, creative, and courageous individuals who have made the Swedish startup scene what it is today. I am thrilled that the Hall of Fame is gaining such a game changer, who also is a woman. I hope that this will inspire others to take a place beside her.”

“Great cities are built on communities and not individuals,” he said at the event. “Stockholm has become an important tech hub in Europe due to the passion, drive, and re-investment of entrepreneurs like Jane, supporting and mentoring others. Success breeds success.”

The motivation for inducting Jane Walerud into the Hall of Fame read:

“During the past 15 years, Jane Walerud has been involved in, and passionate about, the Swedish startup ecosystem – founding, funding and driving management teams. She has enabled companies in the community such as Klarna, Lensway, Bluetail and Tobii to take their first steps into becoming the big players they are today.

Apart from that, she has paved the way for women within the tech and investment scene and helped develop the Swedish startup scene into the flourishing creature it is today. We therefore see it as an honor to commemorate this by inducting Jane Walerud into the Swedish Startup Hall of Fame.”

During the event SUP46 also presented a report on the growth of their startup members during the past year. See the figures here: http://sup46.com/sup46-the-past-year/