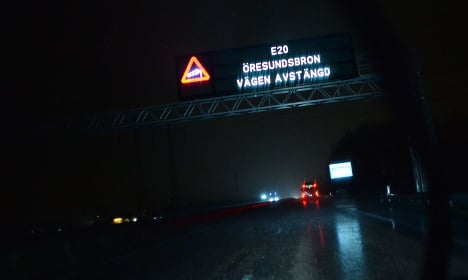 The Öresund bridge, which links southern Sweden to Denmark, was closed last night because of high winds. Photo: Johan Nilsson/TT

The winds have died down and all class two weather warnings have been withdrawn, but in many places fallen trees are still blocking roads. This photo shows some large branches covering a street in Landskrona. A tree blocks a junction of the E6 at Landskrona in southern Sweden. Photo: Johann Nilsson/TT

Many buildings were destroyed or damaged in the storm, with houses crushed by fallen trees, roofs blown off and walls collapsing.

Christian Lausten and his family in Helsingborg were hit especially hard. Late on Sunday evening part of the roof of an apartment block adjacent to them collapsed. “Our windows were blown out, the roof was damaged and the entire gable of our house has collapsed,” Lausten told the Swedish news agency, TT.

“The children screamed, they were sleeping. In my son's room, parts of the roof had been pushed in so it was just centimetres from him.” This apartment building in Helsingborg had its roof torn off by the storm. Photo: Johan Nilsson/TT

As well as causing trees to fall, the high winds were strong enough to pull down power lines and even lampposts. On the E4 in Helsingborg, one car got crushed by a falling street light. This car was hit by a street light on the E4 near Helsingborg. Photo: Johan Nilsson/TT

The Local reader Kenton Knight snapped this photo of a market cabin that had flipped upside down in the city of Lund on Sunday night. One of the sheds for Lund's Christmas market overturned by high winds. Photo: Kenton Knight

Some vehicles also ended up spinning over.

This car came off a road in Malmö, Sweden's third largest city. Police have advised motorists to drive very carefully or to completely avoid venturing out on to the roads in the affected areas. A car in a ditch in Malmö after an accident in stormy conditions in Malmö.  Photo: Johan Nilsson/TT

Wind speeds have now dropped, with most people returning to work or school on Monday.

However plenty of photos are circulating of Swedish residents struggling with everyday tasks during the height of the storm.

This woman couldn't get her umbrella up on Sunday. The forecast for the rest of the day is sunshine and temperatures of around 6C. A woman struggles with an umbrella in central Malmö. Photo: Johan Nilsson/TT