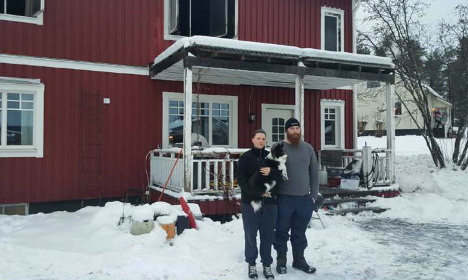 The fire alarm failed to go off when the blaze broke out at around 5am on Saturday morning at Marcus Lindgren's home in Moskosel near the Swedish town Arvidsjaur.

But he and his girlfriend Moa Persson had something better: a two-year-old Shetland Sheepdog by the name of Niva, who did everything she could to wake the couple up.

“We were asleep and were dog-sitting Niva, my little brother's dog. I am convinced that if we had not had her, we would not be alive today,” a still shaken Persson told The Local after the story of her brother's hero dog hit the headlines in Sweden on Wednesday. Fire engines outside the couple's home in Moskosel. Photo: Private

Lindgren got out of bed to find out what was going on after the couple were woken up by an agitated Niva jumping on to their bed and down again. Initially suspecting a house break-in, he quickly realized the entire top floor was filled with thick, black smoke.

Most of the fire had burned out by the time the emergency services arrived, but the area where it started was completely destroyed with the majority of their belongings damaged.

Four days later, Persson and Lindgren are mainly grateful they and Niva survived the blaze, which is believed to have been caused by an electrical fault.

“I am still in shock. It's been a couple of days now, so we are feeling a bit more relaxed, but I still feel nervous going to sleep at night. It was a bit difficult handing her back to my brother,” added Persson of her canine guardian angel. The incident turned Niva into a hero in Sweden, with both regional newspaper NSD and national media reporting on the firefighter dog. And she has been well rewarded for her effort.

“She's been given roe deer meat to eat, she's been allowed to sleep in bed – she's been really spoiled. (…) But everyone says she's the hero of the night,” said a proud Persson.

Niva is not the first Swedish pet to make headlines for rescuing her human friends from a fire this year. A cat owner told The Local last month how her cat was named hero feline of the year for saving her after her smartphone almost caught fire.