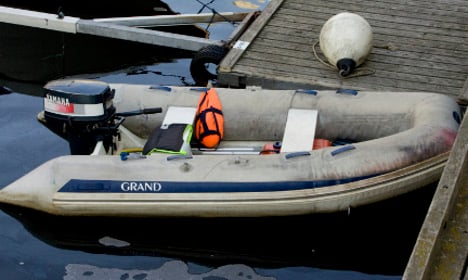 A boat similar to this one is believed to have been used by the refugees. Photo: Morten Holmcan/TT

The refugees were discovered in a rubber boat in Skillinge harbour in Skåne, according to a classified intelligence report first seen by Swedish broadsheet Dagens Nyheter (DN).

They are understood to be the first group to be caught attempting to bypass newly toughened border controls by sailing to Sweden in this kind of boat.

According to DN, the secret document about their efforts was recently handed to Sweden's Ministry of Justice by Sweden’s Department of National Operations (Noa).

“It is too early to comment if the individual case of a rubber dinghy that arrived in Skillinge harbour is human trafficking,” DN reported the file as stating.

Linda Staaf, an intelligence chief at Noa confirmed to the newspaper that it had “received the information” about the refugees' efforts.

“We've double-checked it, and we stand by it. But I can not go into how we got the information or from whom – whether from the police or the Migration Agency,” she said.

But a local fishermen Tommy Persson later told Swedish broadcaster SVT that he had seen the boat entering the harbour on Monday 23rd November.
“I met the rubber boat that was coming into the harbour when I was on the way out. I first thought they had been fishing for cod but that is unusual at this time of year,” he added.
The witness also speculated that he thought the boat was too small to have crossed the Baltic sea and had most likely been released from a larger vessel.
The Swedish Coastguard was quick to react to the claims, with press spokesperson Mattias Lindholm telling SVT that “if the information is correct this must be a singular case,” explaining that staff had not seen any other groups attempting to reach Sweden in small boats.

DN said in its news story that the intelligence report warns that new border controls in Sweden are making it more common for refugees to hide in various forms of transport in order to try and reach the Nordic country.

Sweden stepped up its immigration checks last month after announcing that it could no longer guarantee accommodation to all refugees arriving in the Nordic nation. Since then, the number of new migrant arrivals has dropped by a third, according to Sweden's migration agency.

More than 80,000 people have applied for asylum in Sweden in the past two months alone, which would be the equivalent of 25 million asylum seekers for the entire EU, Swedish Prime Minister Stefan Löfven said last week. The leader made the comments after announcing that Sweden would drastically tighten its asylum rules, no longer guaranteeing permanent residency to successful applicants.