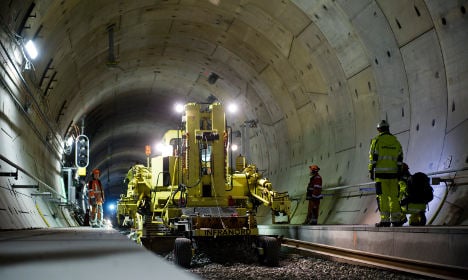 Light at the end of the tunnel? Photo: Björn Lindgren/TT

The trouble-hit Halland ridge tunnel in southern Sweden was set to be opened on Tuesday.

“It feels almost magical after everything we have had to put up with,” Swedish Transport Administration's communications strategist Johan Persson told the TT news agency.

“It has been an emotional rollercoaster ride from beginning to end.”

The idea of creating a railway tunnel through the Halland ridge separating the Skåne region from Halland to speed up trains in southern Sweden was first voted through by parliament in 1991.

The old railway ran over the ridge, reaching some 100 metres above sea level, creating a bottleneck for increasing traffic on the line.

Drilling began in 1992, but stopped after reaching just 13 metres into the mountain. The contractors at the time, Kraftbyggarna, who also failed to use conventional explosives to create a path through the ridge, realized their equipment was not suited to handle its unusual type of porous rock.

Swedish construction giants Skanska took over in 1996, only to be hit with a massive environmental catastrophe when it attempted to plug leaking water holes using a poisonous substance which ended up polluting the area. Cattle fell ill and workers involved in the project later reported nerve damage.

All construction work stopped and was not resumed until 2001. Persson himself was born a few kilometres east of the northern tunnel exit and remembers the saga's twists and turns well.

“People thought I was a traitor who was working with the project. Emotions were running incredibly high during that period,” he said.

“The industry learned then the importance of keeping an eye on environmental issues and maintaining a good relationship with the outside world – media, the public and local residents.”

And attitudes have since changed. In 1998 only 20 percent of residents in the area supported the project, compared to 80 percent today.

Later on Tuesday, Infrastructure Minister Anna Johansson is set to open three new railway stations connected to the new line and on Sunday the first trains will roll through the 8.7 kilometre tunnel.