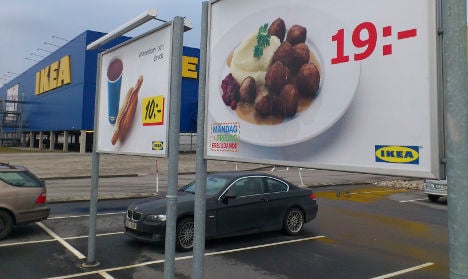 Sales increased by 11.2 percent to 31.9 billion euros for the company which popularized flat-pack furniture, although that increase fell to 8.9 percent when currency fluctuations were stripped out.

Together with rental income from its shopping centre business, total revenue increased by 11.5 percent to 32.7 billion euros in the year ending August 31st.

“The biggest growth came from comparable stores, with new stores and online sales contributing to the positive result,” said the Ikea Group in its annual report.

Online sales broke the one billion euros level and the company, known for its massive stores located on the outskirts of cities, has been experimenting in other ways to reach more customers.

Ikea said its new “pick-up and order points make shopping with us more convenient for people who live far from a store or those who don't have a car”.

It recently opened three such points in Spain, Norway and Finland where customers can see and buy selected products as well as collect pre-ordered purchases.

Ikea Group is now a Dutch-registered company that controls 328 stores in 28 countries and it employs 155,000 people worldwide.

It is still managed however from the town of Älmhult in southern Sweden, where it was founded in 1943 by Ingvar Kamprad.

Kamprad, whose fortune is estimated at more than 30 billion euros, keeps a hand in running the company, and his children are part of the management.