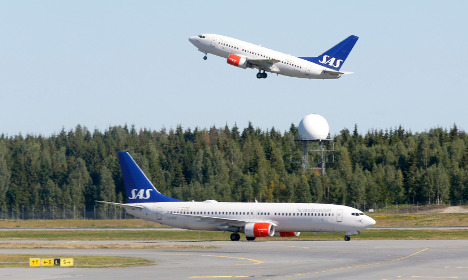 SAS said net profit was 956 million kronor ($112 million) in the 12 months to October, its financial year. It had posted a net loss of 736 million kronor a year earlier.

Lower fuel prices and a higher seat occupancy rate were the main factors for the improved performance, SAS said.

Net profit for the three months to October, the airline's fourth quarter, came in at 517 million kronor, against a loss of 309 million a year earlier.

The news came a day after it announced it was scrapping routes from Gothenburg to London, Paris and Brussels next summer.

And two months ago the company announced it was cutting nine other routes from Nordic cities including flights from Gothenburg to Dublin and Berlin.

However SAS, which is partially owned by the governments of Sweden, Denmark and Norway, has recently introduced a number of new routes from Sweden, including to Los Angeles and Hong Kong. New services between Oslo and Copenhagen and Miami have also been launched.

The firm has spent the past few years struggling in the face of growing competition from low cost airlines, including Ryanair and Oslo-based Norwegian, Europe's third-largest budget carrier.

But in September it announced its pre-tax profits were 30 percent higher this summer than in 2014 and said the company had celebrated its best July for a decade.