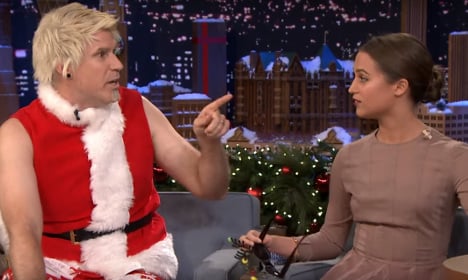 The video clip of the two actors toasting with glögg – traditional Swedish mulled wine – and performing a cheerful version of Sweden's most popular drinking song 'Helan Går' went viral on Friday after they appeared on US talkshow 'The Tonight Show' late on Wednesday.

The clip shows Vikander, from Gothenburg, and Ferrell, who is married to a Swede and owns a summer house in Gnesta, south-west of Stockholm, offering a series of tongue-in-cheek insults in Swedish.

“Jimmy är en idiot,” says Ferrell in the video (“Jimmy is an idiot”).

“That one I understood,” replies talkshow host Jimmy Fallon.

The pair also discuss the intricacies of the Swedish 'julbord', a Christmas smörgåsbord comprised of various foods, including pickled herring, gravlax, meatballs, rice pudding and ham.

Ferrell has been married to his Swedish wife Viveca Paulin for more than 15 years and is well-versed in the often peculiar Nordic Christmas traditions.

The former Saturday Night Live funnyman has even said in interviews that he could imagine moving to Sweden for good, despite also being quoted by Reddit last year saying: “There’s a lot to hate about Sweden. Beautiful people, the high cheek bones, the fact that every person speaks better English than we do and the durability and great warranty plans on a brand new Volvo”.

It is not the first time she has attempted to teach the world about Swedish traditions. Watch this video of her explaining Midsummer's Eve and Crayfish parties during her last appearance on The Tonight Show.