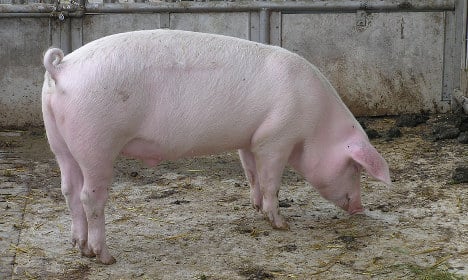 A pig unassociated with the story. Photo: Joshua Lutz, via Wikimedia Commons

Determined to save its skin the 110-kilogramme sow took to its trotters on Monday in Mjallby, a village in Sweden's southern farming heartland.

On Friday, the farmer caught up with the fugitive, who was in fine fettle after her romp through the countryside.

“She's in great form, she must have stuffed herself with rotten fruit and other good things,” the farmer, whose name was withheld, told SVT, the Swedish public broadcaster.

Having been raised on an organic farm she is used to roaming at her leisure, he said.

Moved by the hog's flight animal rights groups launched a Facebook campaign calling on the farmer to spare her from the slaughterhouse.

After 2,500 people signed the petition the farmer relented to let her live.

“Such a commotion! I've decided to let her live until further notice,” he said.

It is not the first time an animal has made a final attempt to survive slaughter. Just last month a cow went on the run in Galicia in Spain.

However, the frantic animal died when she fell from a viaduct while fleeing police.

But a young heifer who was caught after she escaped from an abattoir in France this summer was spared from slaughter.

It was revealed the later pregnant cow would be allowed to spend the rest of her life with her calf at a farm near Paris.