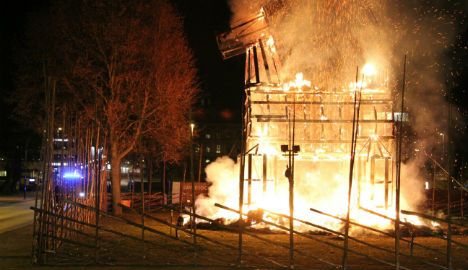 Sweden's Christmas goat burns on Saturday night. Photo: Roger Nilsson/TT
The fire marks the 34th time the gigantic Christmas goat or 'Julbocken' has been burned down since it was first erected in Slottstorget square in the city of Gävle, central Sweden, in 1966.
Police arrived at the scene shortly after 3am on Sunday morning, after a burning smell was reported wafting over the town centre. A heavily intoxicated man in his twenties was arrested shortly afterwards close to the flaming structure.
“The suspect was carrying newspapers and lighters and was wearing a balaclava,” Peter Hultqvist, an office with the local police, told Expressen. “He was drunk and smelled of petrol.”
Video shot on the site show that the man's clothes caught fire when the petrol with which he had doused the animal was ignited in a fireball.
According to police, the man, who on Sunday morning remained too drunk for questioning, had singed hair and soot covering much of his face at the time he was arrested.
Police said they were also on the hunt for an accomplice, who remained on the loose.
By 4am, when the fire was finally extinguished, the goat had been completely destroyed.
The goat, which has nearly 9,000 followers on Twitter, issued a farewell Tweet on Sunday morning.

In previous years the goat has often become ashes well before Swedes opened their first jar of festive pickled herring, so for it to survive until two days before it was due to be dismantled on December 29th counts as a partial victory.
On Christmas Day and Christmas Eve, the goat was bombarded with congratulatory tweets commending it for its survival.

@Gavlebocken Merry Christmas!! So glad to see you survived the perilous Advent season!

This year's structure stood 13 metres high and seven metres long, weighed 3.6 tonnes, and was built entirely of straw.
The municipality had stepped measures to protect the statue as it was due to make a guest appearance at Gävle's Chinese twin city Zhuhai in January.
The goat survived 2014, partly because of a slew of new protective measures brought in by the city, including moving the local taxi rank so that it surrounded the animal, and installing a 24-hour webcam.
Over the years, the goat has been run over by a souped-up Volvo, attacked by a team of Santas and Gingerbread men wielding bows and arrows, and burned down by a gullible American tourist who had been convinced by his Swedish hosts that doing so was perfectly legal. He served ten days in prison.
Below is a video of the inauguration of this year's goat at the end of November. 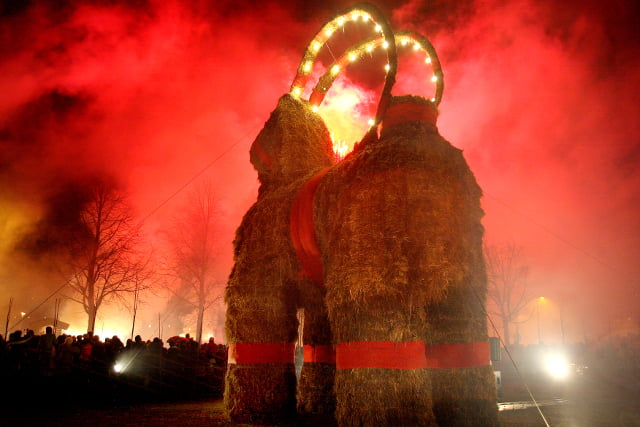 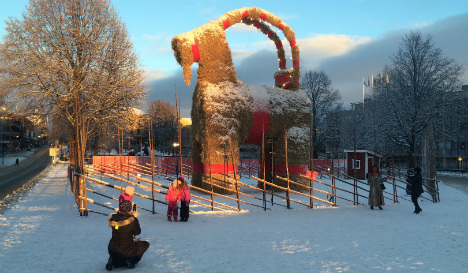