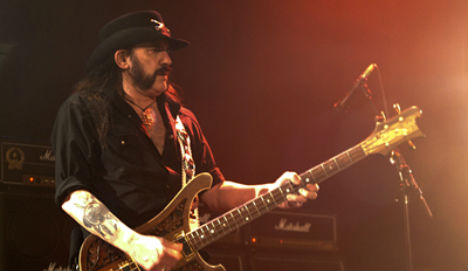 Ian “Lemmy” Kilmister was one of rock's true originals. Photo: John Gullo/Sofajockey/Wikimedia Commons
“When he went home he said, “I’ve had a good run, fuck it”, and then more or less laid down and died,” Mikkey Dee, whose real name is Micael Kiriakos Delaoglou, told the country’s Expressen tabloid.
Dee, who joined the band in 1992, said that the death of its gravel-voiced frontman had come as a shock as only that morning he had been told by the band's manager that the singer had been given two months to live.
“I got a message from my manager this morning that the day before they had discovered that he had a seriously nasty cancer in his brain and neck and wherever else,” Dee said. “Then we heard that Lemmy had perhaps two months to live, so it comes as a shock.”
Dee said that there was no way the group could continue without its leader, who was one of rock’s most charismatic, hard-living and outspoken frontmen.
“Motörhead is over, of course. Lemmy was Motörhead, but the band will live on in the memories of many,” he said. “We won’t be doing any more tours or anything. And there won’t be any more records. But the brand survives, and Lemmy lives on in the hearts of everyone.”
Delaoglou said that he had not had enough time to go to the US to say farewell to his erstwhile bandmate.
“But Lemmy and me sat and chatted for a long time after our last gig, which was actually in Berlin on the 11th, and even then there was something that wasn’t right, I felt.”
“He was terribly gaunt, he spent all his energy on stage and afterwards he was very, very tired,” he said.
“It is really incredible that he could play, that he could finish the European tour. It was just 20 days ago. It’s completely incomprehensible,” Delaoglou said.
He said that he felt a deep sense of gratitude to the band and to the fans.
“I’m incredibly grateful for the years we had, and that we had such a good time together.”
Lemmy, one of rock and roll’s great survivors, was diagnosed with cancer on Saturday — two days after his 70th birthday — and died on Monday.
Here's Mikkey Dee at a press conference earlier this year (photo Frank Schwichtenberg/Wikimedia Commons).