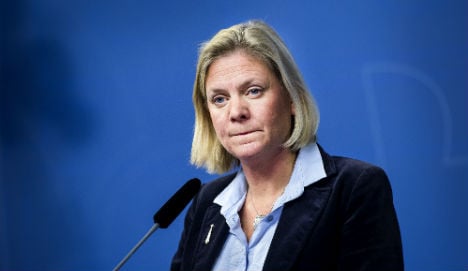 Madgalena Andersson noted that even Britain's Conservative Party had hiked the minimum wage. Photo: Marcus Ericsson/TT
Magdalena Andersson told Swedish broadsheet Dagens Nyheter (DN) that she was sceptical of those who believed that the Swedish government could simply lower salaries.
“The parliament and the government do not set salaries, that’s a question for the labour market,” she argued, adding that she was also suspicious of calls to change the tax system to allow companies to pay salaries lower than what people need to support themselves.
“Then you get close to the British model with large tax subisidies combined with low salaries. But they have had problems, and the Conservative government has now brought in a significant increase in the minimum wage.”
Instead, in a clear break from Social Democratic dogma, Andersson said she was considering extending the systems known as rot-avdrag and rut-avdrag, according to which the state allows private people who employ others to work for them as builders, plumbers, electricians, or cleaners to write off part of the labour costs against tax.
“If you have any good ideas, I’m willing to listen,” she said. “For me it’s more important what is cost effective, than getting stuck in an ideological deadlock.”
A record 170,000 people claimed asylum in Sweden in 2015, many of whom are uneducated or even illiterate, posing a huge new challenge for the country's government.
“We are facing a bit of a test here in Sweden,” Andersson said. “And it’s not only for us politicians, but for the business world too. This is something we need to do together and I think that it’s important that we’re open and pragmatic.”
Andersson’s openness to extending rot-avdrag and rut-avdrag seems to fly in the face of her own government’s most recent budget, which from January 1st reduces the percentage of labour costs for building work which private people can write off against tax from 50 percent to 30 percent.
She argued that the government needed to recognise that the new arrivals had different backgrounds and so needed different types of support.
“Those who come here with an education should be able to complete it quickly, while those with a low level of education, should get a salary support which is attractive to employers. That means that we will have to provide a subsidy for each individual. That’s a cost effective way.”
She rejected the accusation, included in a report from Sweden’s National Institute of Economic Research (NIER) just before Christmas that the government had failed to make clear how it intended to meet Sweden’s fiscal policy goal of maintaining a budget surplus in an economic boom.
“This surprises me immensely. The fiscal policy framework remains valid and and I am controlled by it, just like former finance ministers. In addition, I have with practical policies showed that this government is careful with money, and that is how we have managed to halve the deficit.”