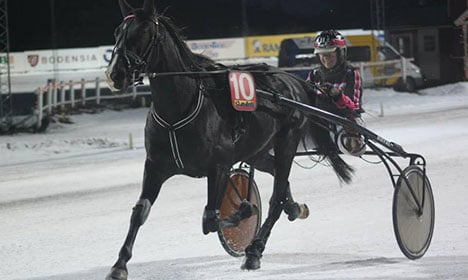 When Ståhl’s horse Iffy Mant was severely injured, vets advised her to put the animal down. Deciding what to do with the body afterwards was easy for the Swede – she was sure she wanted to save the meat and eat it herself.

The 24-year-old competes in harness racing, a sport which sees riders compete at a set pace while pulling along a cart and earns her living as a horse groomer and carer. Helena Ståhl decided to eat the meat from her horse after putting it to down. Photo: Private.

Debates about Ståhl's unusual decision have been going on for several weeks since the rider wrote a Facebook post explaining her choice and responding to some of her early critics.

“I’ve got very varied reactions. Everything from support and curious questions to wrinkled noses and hatred. I never thought that it would get this much attention because to me, this is a normal decision, and I know other people who have done the same thing,” Ståhl told The Local.

On Swedish tabloid Expressen's Facebook page one commentator posted: “Weird girl! How the hell can you be like that? She should have shown respect and gratitude towards everything the poor horse has done for her. But she probably could not afford to cremate or bury or let the slaughter house take care of it.”

Another user rallied: “You don't eat your friend, regardless if it is a dog, cat, horse or human.. Who's next?”

The attention that Ståhl's decision has received in Swedish media was unexpected to the sportswoman, but she has embraced the hype, saying that she sees a big problem in the fact that people still think she made the wrong decison.

“To eat meat from an animal that might never even get to see the sun, nobody thinks is odd. But to eat an animal that you, yourself, have taken care of is suddenly the oddest thing anybody has heard. I think that is scary,” she said.

According to Ståhl, the meat tasted a lot like beef and could be easy to use when making meals such as spaghetti bolognese, tacos or chilli con carne. She said she had had a positive reaction when she shared it.

“Many of my friends claim it’s the most delicious meat they have ever eaten.”