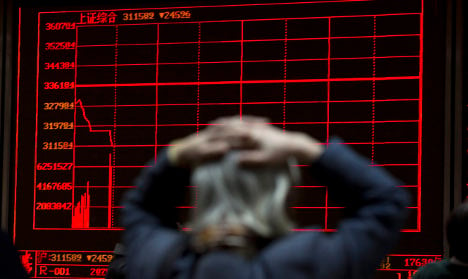 A woman in China reacting to the crash. Photo: AP/Ng Han Guan
It's been a turbulent start to the year for the Swedish stock market, with the country's OMXS30-index dropping by 4.2 percent by 10am on Thursday after also feeling jitters earlier this week.
Average stock prices are now seven percent lower than at the close of 2015, with major Swedish firms including Ericsson, Handelsbanken and Swedbank among those experiencing dips.
The shaky situation comes as much of Europe feels the ripples of plummeting stocks in Asia with dramatic drops also recorded in countries including Germany and the UK. Global crude oil prices – a major marker of economic stability – have fallen to levels not seen for more than a decade.
The Chinese currency, the yuan, is at its lowest level against the dollar since February 2011, and China's stock market experienced its shortest trading day in its 25 year history on Thursday, with markets stopped around 30 minutes after they opened. It is the second time this week that the markets closed early, following the introduction of a new mechanism designed to curb turmoil in the country by limiting trading.
“This shows that the Chinese are still difficult to predict, they make up their own rules and we have to take the Chinese stock market with a pinch of salt,” Claes Hemberg, an economist at Swedish financial savings firm Avanza, told Swedish tabloid Aftonbladet as the tumble in Stockholm emerged.
He warned that the uncertainty in China could continue to have ripple effects in Sweden and worldwide.
“The Swedish economy is linked to China where we sell some industrial goods (…) it affects the whole Swedish economy in the long run,” he argued.
The expert also urged Swedes who have invested heavily in Chinese companies to ensure that they are not overly dependent on the Asian country.
The disruption this week comes just months after an earlier shock currency devaluation last August caused international concerns, described as a “warning flag” at the time by Johan Javaeus, chief strategist at one of Sweden's largest banks, SEB.
On Wednesday, the World Bank lowered its global growth forecast for 2016 from 3.3 perent to 2.9 percent in reaction to the Chinese slowdown, Bloomberg reported.
However there was good news for some Swedish companies on Thursday, with SAS seeing its shares rise by 9 percent and a 2.3 percent increase for Swedish match, according to Swedish newspaper Expressen.