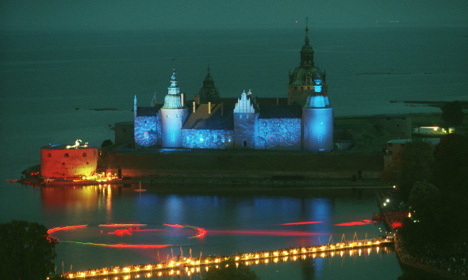 Stock photo of Kalmar castle. Photo: Jonas Ekströmer/TT
Police in the Baltic city told Swedish newswire TT on Friday that they had arrested a 15-year-old boy and a man aged 20 on suspicion of having molested a number of women in the early hours of January 1st.
The news agency suggested that seven potential victims had initially come forward, with others contacting police later in the week.
No further information about the alleged perpetrators' identities or ethnic backgrounds were revealed, as is standard practice in Swedish investigations.
At least seven of the attacks are understood to have taken place in Larmtorget bar in central Kalmar.
“We saw the whole picture a few days ago,” Johan Bruun, a police spokesman told Swedish tabloid Aftonbladet.
“We currently have at least 14 plaintiffs,” he added.
News of the alleged assaults emerged amid global headlines about 121 sexual assaults in the German city of Cologne on New Year's Eve. Police chiefs are accused of attempting to hide asylum seekers' involvement in the reported crimes, following reports that witnesses saw a large group of men understood to be of Arab or north African appearance, appearing to harass women.
But Swedish officers have been quick to brush off any comparisons with the mass attacks in Germany.
“We still do not really know what happened here, but it seems to be much more serious in Cologne. We want to investigate our part first,” Bruun told Aftonbladet just before the two suspects were arrested.
“It is important to clear up this so that women can walk safely in the streets,” he added.
The Local has contacted Kalmar police for further comment.