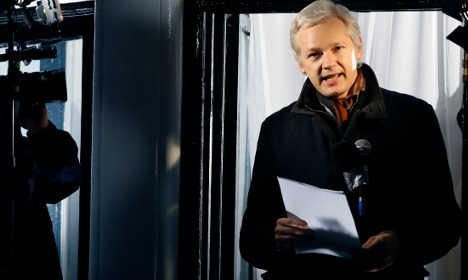 Sweden and Ecuador signed an agreement in December on general legal cooperation between the two countries, a deal expected to allow them to move forward with the interrogation of the 44-year-old Australian.

Ecuador had demanded that such an agreement be in place before it would let Swedish prosecutors interview Assange.

Prosecutors want to question the WikiLeaks founder on a rape allegation that dates back to 2010, but he has repeatedly refused to travel to Sweden and has been holed up at Ecuador's embassy in London since 2012.

Assange fears that if he leaves the embassy, he could eventually face extradition to the United States and a trial over the leaking by WikiLeaks of hundreds of thousands of classified military and diplomatic documents in 2010.

TIMELINE: Everything that's happened in the Assange case

Last March, Swedish prosecutors offered to question Assange in London, dropping their previous demand that he come to Sweden to answer to the allegation.

But Ecuador refused to allow such a meeting until a bilateral judicial agreement was in place.

But they still want to question him about the rape allegation, which carries a 10-year statute of limitations that expires in 2020.

Assange has denied all of the allegations and insisted the sexual encounters were consensual.