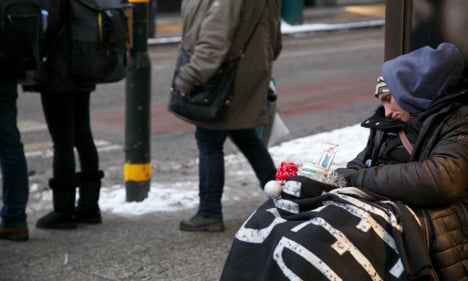 A woman begs for money in Stockholm. Photo: Mallory Moench
Amayd, a Nigerian mechanic, Thomas, a Swedish former bus driver, and Zina, a Roma magazine vendor, have only one thing in common: struggling to find a place to sleep in Stockholm.
“It’s hellfire,” says Amayd, describing his life on the streets. A short man with a slow gait, grey-speckled beard, and blood-laced eyes, he is a 42-year-old father from Nigeria. After 13 years as a permanent resident in Spain, he arrived in Stockholm two weeks ago, in search of work.
Every night, he’s entered the lottery for a bed at a Salvation Army-run centre with success. But on Sunday, his name wasn’t drawn – and so he had nowhere to sleep. He stayed in Stockholm's Central Station until it closed, then spent the night walking through snow-blown streets.
“I only have one coat,” Amayd told The Local. “I was afraid to die of the cold.”
The Nigerian's story is extreme. While he’s one of at least 2000 people formally defined as homeless in Stockholm, the city categorizes homelessness on a spectrum that extends to those living in government-assisted apartments. It also boasts a unique “roof over your head” guarantee ensuring that no Swedish resident has to sleep outside.
As a migrant from elsewhere in the European Union though, Amayd doesn’t fall on to this Scandinavian welfare net. His case is an example of how Stockholm’s homeless population is starkly divided between Swedish citizens and permanent residents versus EU migrants. Although all these groups share similar needs, registered citizens and residents receive social services, but unregistered migrants aren’t entitled to government benefits.
“If you’re not registered and you don’t have any money, we’ll give you economic help and shelter,” said Lena Svärd, director of the city’s emergency homeless reception. “You can stay here for three months, but if you don’t find a job or nothing happens after that, we can’t help you and you can’t stay.”

A homeless shelter in Stockholm. Photo: Mallory Moench
While Stockholm’s social services fund non-profit organisations to help temporary migrants, they focus on tackling Swedish homelessness.
The capital's unit for the homeless helped 1475 clients in 2015, most of whom were Swedish males aged between 45 and 65. For those with dire need, the city runs six shelters with space for 207 clients.
Social workers like Swärd attribute homelessness among native Swedes to three main causes: lack of housing, substance abuse, and mental health. To address the first cause, Swärd and her team try to get clients into a permanent place – a tough job in Stockholm’s notoriously competitive housing market.
“It's difficult to get an apartment, and if you have problems, it’s difficult to stay if you don’t get support,” she said. “If clients get good support, around 90 percent can stay in their apartments. If they live there for one year and everything works out fine, they get the contract for themselves.”
46 percent of the clients who left Swärd’s unit last year now live in their own place. But Bodil Nilsson, director of the Salvation Army’s drop-in centre for homeless Swedes, said she doubted whether this would solve their core issues.
“Our guests are living on the edge of society,” said Nilsson. “Many of them have a place to stay, and some have their own contract, but that doesn’t mean they’re happy. Getting their own apartment is not the solution, and they can lose it because of old habits.”
Such “old habits” are drug and alcohol addictions and mental health problems that estrange clients from their families and hinder individuals from keeping jobs.
Thomas Ljungberg, a self-depreciating but good-humored 50-year-old with sparse ginger hair, shared his story as he commandeered a table with two friends at the Salvation Army on Monday morning. He’s been unemployed and homeless because of mental illness since 1997.
“I experienced traumatic things in the past that I couldn’t process, and it broke my mental health,” he explained. “I worked as a bus driver for seven years, it was the best job I ever had, but my brain was overloaded. When I get tired, I can’t control myself, and I didn’t want to have a busload of people behind me, so I chose to stop because I was broken down mentally.”
For 13 years, Thomas slept in temporary shelters until getting his own apartment, supported by the government, five years ago. He now regularly sees a psychiatrist.
“I don’t think of it as helpful, but I guess it is,” he said. “Four years ago, I was like a walking zombie; I could have never sat here and had a conversation.”
Whatever the cause of homelessness, many of those affected simply need help navigating their way through the complicated social system.
Nilsson explained: “They come to us because they lack the ability to take responsibility, or they’re away from the system and they don’t have the strength or energy or knowledge to get back. Often they want help, but they’ve been in the situation for so long, they say there’s no point. It takes a lot of courage to turn your life around.”
“But it’s possible,” Swärd added. “The city is expanding every day, but we have fewer homeless people.”
While homelessness among Swedes has steadily decreased over the past decade, the number of homeless EU migrants has however skyrocketed.
“In the past four to five years, it’s got worse,” said Björn Taikon, a Roma who grew up in Sweden and has 25 years experience working with the municipality. “More people are coming because all of Europe is closed,” he says, musing on tougher immigration lines being taken by many of Sweden's neighbours.
Social services estimate there are now between 600 to 1000 EU migrants without regular income or proper housing in Stockholm. 40 per cent are Roma, many of whom describe themselves as gypsies.
“It’s very difficult to work with this population, because the long-term solution is in their home country,” said Åsa Lindhagen, Stockholm’s vice-mayor for social affairs. “It’s a shame and tragedy that we haven’t succeeded better in Europe to distribute the wealth to everyone. So we have to do everything we can to make it easier for their stay here, especially during winter.”
“When we found out that people were sleeping on the streets and it was very cold, the city offered shelters,” explained Swärd, “so that people won’t die.”
READ ALSO: Meet Northern Sweden's frozen Roma beggars
In November 2014, the city began funding non-profit organisations, including the City Mission, Salvation Army, and Philadelphia Church, to provide shelter during winter nights.
Taikon and his colleague Moise Besokadap, also a Romani who grew up in Stockholm, took up the project. Nearly every day since then, the pair gather at designated times in central locations throughout the city.
Within minutes of the two men entering Stockholm's Central Station last weekend, bearded men in parkas and dark-braided women in swishing skirts flocked to them, warmly greeting the two in the Romani language. Besokadap took each person’s ID card and wrote down his or her name and personal number. It’s his job to assign them to a bed in one of the four night shelters on a first come, first served, basis.

Moishe Besokadap registering EU migrants. Photo: Mallory Moench
“There are always too many people, but we try and find them other shelters,” Besokadap said. The only exception is if the temperature is below -7C, when churches open their doors for people to stay without registering.
On Tuesday night, the temperature hovered around the limit. Thick snowflakes swirled in streetlamps as a group of Roma trudged past deserted warehouses in the shadow of the Globe Arena to the city’s largest EU migrant shelter.
At 9pm, the doors opened. A volunteer checked each guest’s number, then took their 10 kronor ($1.17) entrance fee. Once registered, guests can stay five nights – then they must re-register, find a new place, or enter the lottery for one of the free beds.
Upstairs, volunteers dished out mounds of food and served steaming cups of coffee or tea, and after eating, the guests settled into their bunk beds, took showers, started a game of chess, or showed off pictures of their children.
One married couple Gratian, 24 and Zina, 26, left their two children in Romania with Gratian’s mother to come to Sweden four months ago.
“It’s much better,” Zina said with a vivacious smile. “We get work here and our family gets food on the table.”

Gratian and Zina, from Romania, are staying in one of Stockholm's homeless shelters. Photo: Mallory Moench
Gratian has found sporadic temporary jobs while she cleans, sells magazines, or recycles cans.
Without language skills and permanent residency, though, they’ve struggled to find permanent work, and they asked Besokadap for help to find better jobs.
“They trust us because we’re family,” said the social worker. “They don’t trust the government, they think they want to do something to them or take something from them, but they trust us because no gypsy would want to hurt another gypsy.”
Downstairs, registration was complete, but two men still waited outside the front door, hoping there were empty beds left. There were not.
A volunteer told them to try another one of the shelters, explaining the location and pointing them in the right direction. The two men turned back into the dark, snowy night, hoping they’d get lucky elsewhere.
Stockholm seems to be working hard to ensure that people aren't left out in the cold. But as the city's homeless population changes shape, debates about how to handle the situation are just starting to heat up.
Contact the City Mission or the Salvation Army to find out how you can help
Article by Mallory Moench