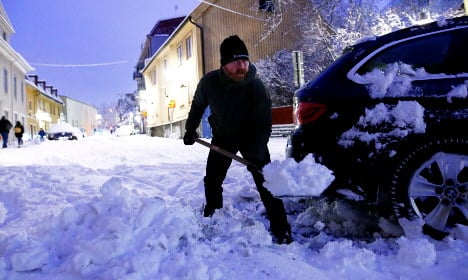 Swedish national weather institute SMHI issued a class-1 warning (the least serious kind on a scale from one to three) in the areas around Gothenburg, Halland, Sjuhäradsbygden and western Jönköping.

Only one in three busses were running to schdedule in Gothenburg by 9am, said regional transport authority Västtrafik, while many trams ground to a halt.

“The trams that are out can't get further than a few metres before they have to stop. It's like concrete made out of ice on the tracks,” Kent Franck, head of traffic at Göteborgs Spårvägar, told GP. Meanwhile, ploughs battled to keep the falling snow off major roads in the busy commuter region.

“It's been coming down since Monday evening, in some areas probably up to 20 centimetres of snow. We've sent out everything with a plough but it's difficult,” Trafikverket duty officer Patrik Jardefur told the Aftonbladet tabloid.

It's fair to say we've got a snow day in Gothenburg right? https://t.co/k2ydAYNrmI pic.twitter.com/Y1uovEOAfx

Further south, in Halland, the southbound E6 motorway was closed just north of Varberg after a truck went off the road.

READ ALSO: How to act like a true Viking in winter All flights in and out of Landvetter airport, Sweden's second-biggest, were cancelled until 8am. Passengers travelling later in the morning were urged to keep an eye on its website for changes to departure times. Maybe if I push my car…? Photo: Thomas Johansson/TT

After an unusually warm month of December, Sweden has been experiencing a chilly January. However more northerly parts may yet shrug at Gothenburg's chaotic morning, with one town battling far more extreme temperatures of -42.8C earlier this month.

To read the forecast for your part of Sweden, check out The Local's weather page.