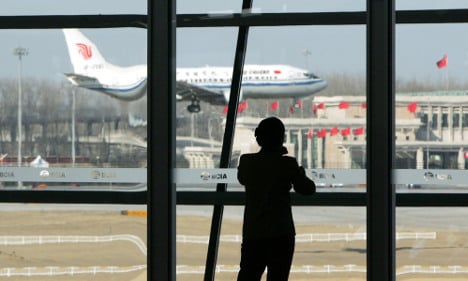 Beijing airport, where Dahlin was when he got detained. Photo: Greg Barker/TT

Peter Dahlin, who worked for the Chinese Urgent Action Working Group, was detained earlier this month as he prepared to board a flight from Beijing.

It is rare for China to accuse foreigners of national security offences, which can carry heavy penalties, although some have been accused of spying.

It did not clearly state which of Dahlin's activities constituted a crime, but said China Action staff “collected many kinds of negative information about China, and distorted them… to provide so-called China human rights reports”.

China Action said it provided training to human rights lawyers who have tried to use China's tightly-controlled judiciary to redress apparent government abuses.

Authorities launched a sweeping crackdown against such human rights attorneys last July, detaining more than 130 legal staff across the country.

This month at least 10 people were formally arrested on “state subversion” related charges after being held in secret for six months.

Xinhua said China Action had worked closely with the Beijing-based Fengrui Law Firm, at the centre of the July crackdown, providing its lawyers with funding.

The report said Dahlin had confessed to using unverified information.

The news agency quoted Dahlin as saying: “Our reports were gathered from online information… and we can't ensure that all the information is accurate”.

China regularly publishes “confessions” from alleged criminals in state media. Lawyers say such statements are often made under duress and violate the right to a fair trial.

Sweden has summoned China's ambassador over Dahlin's detention, which has raised fears about the ruling Communist Party's lack of respect for legal procedure as it cracks down on government critics.

China denied Dahlin access to consular officials for weeks after his detention, China Action said, adding that his girlfriend — a Chinese national — had also been held.