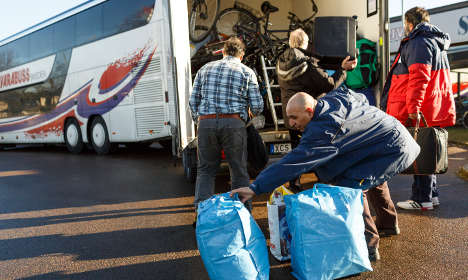 The Arena Hotell in February last year. The men pictured are not connected to the article. Photo: Anders Andersson/TT

Officers said the pair were hurt after being attacked with a “knife-like object” overnight between Tuesday and Wednesday after an argument escalated at the Arena Hotell in the city of Halmstad.

Their injuries were not believed to be serious, according to police quizzed by Swedish media.

Officers arriving at the scene seized a third individual, suspected of trying to kill the other two.

“Two different factions have clashed,” police control room officer Johan Johansson told the TT newswire. “It has happened before,” he added in a comment to the Aftonbladet tabloid.

“One person has been arrested, suspected of attempted manslaughter. Another two are in custody, criminal suspicions could arise for them as well.”

It remained unclear early on Wednesday morning what was behind the argument and police said they had struggled to question witnesses because of language barriers.

“It's a bit difficult because they don't speak English, or any other language but their own,” Johansson told Aftonbladet.

Last spring the Migration Agency's temporary accommodation facility at the Arena Hotell faced criticism following reports of violent rows, short staffing, and police call-outs. It later said that many of the issues had been due to overcrowding at the centre at the time.

Sweden took in around 163,000 asylum seekers in 2015, but numbers dropped in the last few weeks of the year after border checks were reinstituted following warnings of accommodation shortages.