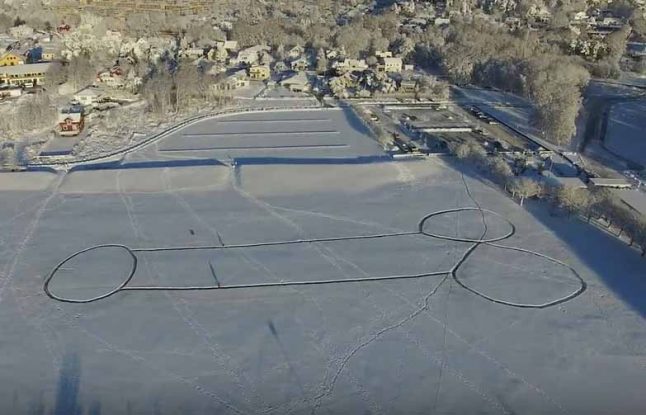 Read an updated version of this story here

The first, smaller penis was drawn in snow that fell on top of ice in Kungsparken (King's Park) over the weekend. It was removed a few days later, sparking nationwide debates about art and freedom, versus political correctness.

The Facebook group called 'Restore the snow penis' was set up campaigning for its return, quickly attracting more than 2,500 members.

Now one of the men behind the removal, Emilian Sava, who works for a cleaning company in Gothenburg, has created an even bigger version of the genital.

Read The Local's interview with the man who made the new, bigger penis


The removal of the other first penis. Photo: screenshot from Emilian Sava's video.

The move came after he used the Facebook page to say he regretted getting rid of the previous version and hoped to put things right.

“I want to say that I am sincerely sorry to see that this many people miss the snow penis. Our thought was to give a hand to the City Council who stand helpless and not try to stop the freedom of art,” he wrote on Wednesday.

“For this I want to apologize. To recreate the snow penis in Vallgraven [another area of Gothenburg] is risky but we are thinking about you and at this moment I am trying to figure out the best way to recreate a big and lovely snow penis in the memory of the old one. Please offer suggestions and we will do our best to make this happen. Kind regards/Emilian Sava.”

Sava and his colleagues created the new snow penis early on Thursday with help of professional snowblowers. The snow penis so is large, it can’t be identified from the ground. However birds-eye views of the new image, snapped from the sky, have gone viral.

“At least now no one can get offended by the penis. It can’t be seen from the ground, however, a helicopter pilot that flies over it can get a good laugh,” Sava told regional newspaper GT.

Members of the Facebook support group quickly praised Sava’s initiative, with some even getting emotional.

“Moved to tears,” another member posted.

“More snow penises for the people!” a third person wrote.

Sava told Swedish tabloid Aftonbladet he believed he had started a new trend in Sweden.

“Absolutely, why not? All people of Sweden can try and draw penises. Freedom of art for everyone,” he told the tabloid.

Who drew the first snow penis remains a mystery.