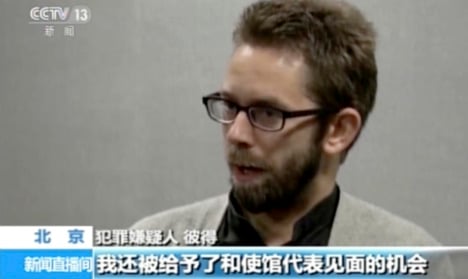 “We have said, through diplomatic channels, that it is unacceptable, that we want information and we want to see them,” Wallström told the Swedish TT press agency.

One of those detained was activist, Peter Dahlin, who worked for the Chinese Urgent Action Working Group.

He was detained two week ago at Beijing airport while attempting to board a plane bound for Thailand.

The previous day CCTV had broadcast a video of Hong Kong bookseller Gui Minhai, a naturalised Swedish citizen, confessing to a years-old mainland drink-driving offence and saying he did not want Stockholm to interfere with
his case.

China-born Gui was rumoured to be preparing a tell-all book about the lovelife of President Xi Jinping. He disappeared from Thailand late last year before reappearing on Chinese national television in police custody.

While forced public confessions are an old practice in Communist China, they have experienced a resurgence since President Xi took power in 2012.

“It is completely unacceptable that they were made to parade themselves in this manner,” on public television, said Wallström. “This kind of behaviour is not acceptable.”

Beijing only rarely accuses foreigners of endangering state security, a crime which can receive a heavy sentence.

A lawyer for Chinese activist Zhang Haitao said Friday that his client has been jailed for 19 years in the volatile northwestern Xinjiang region over online posts criticising the ruling Communist Party and for giving interviews to foreign media.

Journalism advocacy group  Reporters Without Borders on Thursday urged the European Union to impose sanctions on Chinese state media over the “forced confessions”.