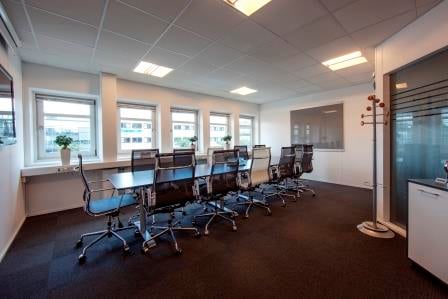 Take Kista, for example, just a short drive away from downtown Stockholm.

“Kista is the IT mecca of Sweden,” says Patrik Ölvebäck,country manager for Regus offices in Sweden, referring to a tech cluster just north of downtown known as the ‘Silicon Valley of Sweden’.

Business may be thriving and the tech scene thriving, but combined with Stockholm’s housing crisis, that means businesses of all types, large and small, scramble to find workspace. That’s where Regus, a world leader in serviced office space, comes in.

“A lot of companies need to be flexible and have offices in which they can grow,” Ölvebäck explains.

Regus’s model of offering part-time or short-term office contracts has been favourably received by the Swedish business community – there are already 14 locations in Stockholm, Solna, Malmö, and Gothenburg. Kista is the latest addition, with a brand new centre opening on April 1st. In total Regus offers some 650 offices and 2,000 workspaces across the country.

“There’s a large need for flexible work space, and Kista is a really good place for international companies to locate their branch offices in Sweden.”

Kista, northwest of Stockholm and located conveniently between the Bromma and Arlanda Airports, is just about a 20 minute drive from downtown Stockholm and also offers easy access to the city’s extensive metro system. Customers who rent office space in Kista will also have access to Regus office space located in central Stockholm.

“If you have your office in Kista, for instance, and you have a meeting in downtown Stockholm, you can just pop into another Regus centre for a couple of hours instead of working from some coffee shop,” Ölvebäck says.

“Kista is one dot in our global network, and you get access to our 3,000 serviced offices around the globe.” Clients are able to work on the move by plugging into a Regus mobile office when they are on the road, whether they are in Stockholm, London or New York. And it’s not just about office space – Regus also provides meeting rooms, board rooms, and video communication, with the opportunity for users to adapt costs to suit their actual needs.

Membership includes access to Regus business lounges complete with wifi, coffee and tea, and reception services, as well as the possibility of upgrading for a few days of private office space each month.

Information about Regus workspace centres in Sweden (in English)

This article was produced by The Local and sponsored by Regus.