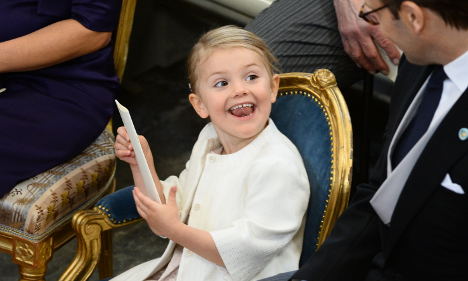 The little girl's mother, who asked to be known simply as Rebecka, shared pictures of her lookalike daughter with Swedish tabloid Aftonbladet on Monday, with the snaps quickly going viral.

Both of the blonde children share a similar gappy smile and a shared love of horses and pink headbands.

Rebecka said that Mira, who is five months older than four-year-old princess Estelle, had even found it tricky to work out whether she was looking at photos of herself or the young royal. The montage Rebecka showed her daughter. Can you spot the difference? Photos: Unknown/Private

“It has caught attention for two and a half years that they look like each other…we have mostly said it as a joke,” she added when contacted by The Local.

The mother explained that she used to get embarrassed when people started mentioning the likeness between the two girls on Facebook and Instagram and tended to remove their comments.

However she later decided to officially share the pictures with Aftonbladet and the Swedish tabloid Expressen after so many friends posted about the similarities.

She said that the pair “become more and more alike the older they get” and she is now having to get used to strangers stopping her and Mira to talk about it.

“The other day, a lady came up to us as we sat on the bus and commented on how alike they are,” she told Aftonbladet.

Rebecka said that Mira “understood” that her doppelganger was a member of the Swedish royal family.

Commenting on the story's rapid spread in Sweden on Monday, she told The Local via Facebook: “I really feel I'm lucky to have a private number right now”.

The doppelganger is on the left

Meanwhile Estelle herself – the daughter of Crown Princess Victoria and Prince Daniel – has some of her own excitement in store, with the arrival of her first brother or sister expected in March. The Princess will also have a new cousin to play with, since Prince Carl Philip and Princess Sofia are also set to become parents in the spring, less than a year after tying the knot in Stockholm.