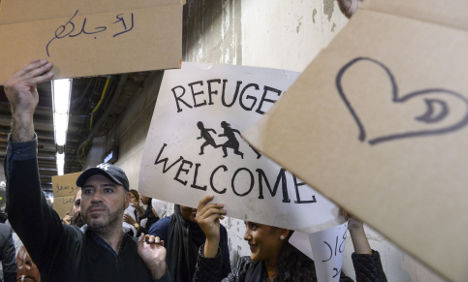 At 6.40am I stepped off a night train at Stockholm's central station after a weekend break in Swedish Lapland.

If you've been reading some of the international media coverage about my adopted city in recent days, you'd be forgiven for thinking I was risking my life.

One British newspaper, The Express, described the station as a “no-go zone”, overtaken by “all-male migrant mobs spreading terror” by groping and robbing passengers and staff.

Meanwhile a writer for US news and opinion site Breitbart declared there was a “rampant” lawlessness and a “now-constant state of violence, terror and fear”.

On Friday night, newspapers, radio stations and television networks all over the world reported on a group of masked far-right demonstrators who appeared to be reacting to this presumed state of chaos. They beat up non-Swedes and vowed to give foreign teenagers living on the streets around Stockholm Central Station the “punishment they deserve”.

So did I feel scared arriving back in the Swedish capital? Absolutely not.

As I headed to catch the blue subway line home, morning commuters were travelling calmly into work, a cleaner was polishing an already glistening white floor and two security guards were strolling slowly out of a newsagent, sipping on their takeaway coffees. The main square outside was empty, save for two Swedish teenagers sharing a cigarette.

At Stockholm's main station. No sign of neo Nazis. Nor 'gangs' of migrants making it a 'no go zone' for women. pic.twitter.com/7OOFwpD3Ma

Sweden has spawned some alarming headlines lately.  A teenager at a centre for unaccompanied refugees near Gothenburg was arrested on suspicion of murdering a 22-year-old woman who worked there. Police admitted covering up reports of multiple sex assaults at a music festival. Dozens of homes for asylum seekers have been set on fire.

However, it is crucial that these news stories are viewed in context. Immigration and integration are becoming increasingly thorny issues in Sweden, and the country's reputation as a beacon for openness and tolerance has taken a battering. But neither sex attacks by migrants nor radical racism are the new norm. The We are Sthlm festival where sex assaults were reported in 2014 and 2015 but not made public by police. Photo: Alexander Tillheden/We are Sthlm

In 2015, as Sweden took in a record 163,000 asylum seekers, the number of reported rapes in the Nordic nation actually dropped by 12 percent compared to the previous year, according to figures released by the Swedish National Council for Crime Prevention (Brå) in January. Meanwhile petty thefts dipped by two percent.

As for personal safety around Stockholm's central station, police were unable to immediately provide The Local with the number of reported assaults over the past 12 months. But a press officer, Lars Byström, insisted that tourists and residents alike should not feel under threat.

“Normally Stockholm is not a dangerous place to visit or to take a walk outside in. I think it is rather safe,” he said.

Asked why one anonymous officer recently told Swedish television that he would not let his own family go near the station, he described his colleague's comments as “a little bit strange”.

A very unscientific strawpoll of my female friends in Stockholm on Monday revealed that no one had experienced or even heard of other women being groped by refugees in the station in recent months, other than in media reports. But plenty could talk about being felt up by drunk Swedes on a night out.

News stories that hone in on a rise in support for the far-right Sweden also deserve a number of caveats.

Neo-Nazi inspired activity – such as that witnessed on Friday in Stockholm – does appear to be on the rise. Yet a report by Swedish anti-racist foundation Expo last year suggested that membership of fascist organisations in Sweden has fallen.

It is well documented that support for the anti-immigration Sweden Democrat party (SD) shot up in 2015, with 22 percent of people asked by pollsters Novus saying they would pick the party in December. But while for many international newspapers these statistics slot neatly into the theme of a “lurch to the right” across Europe, Sweden's unique political climate also needs to be taken into consideration. Until recently all of Sweden's centre-right opposition parties strongly backed the country's open borders, alongside the Social Democrat-Green coalition government. Voters who were unsure about rising immigration had no one to turn to except for the Sweden Democrats.

Yet in the past few months many of the traditional parties, including the governing Social Democrats and the main opposition Moderates, have adopted stricter policies on asylum and immigration, and support for the country's nationalist party is appearing to stall: SD's following dropped by two percentage points in Novus' latest survey last month.

On Sunday, thousands of Swedes turned to social media to voice their frustration that the party said it was protecting “Swedish women” from immigrant attacks when its members handed out flyers in Stockholm over the weekend, with the hashtag #inteerkvinna (#notyourwoman) trending on Twitter.

While surveys suggest the majority of Swedes back their country's decision to tighten asylum rules amid an acute strain on resources, that does not mean that support for helping refugees in principle is waning. Up until last autumn, when local authorities began warning that they could no longer cope with the record influx, surveys were showing very different results.

Growing numbers of Swedish people may now be openly questioning their country's ability to offer accommodation to refugees amid a national housing crisis, or wondering whether politicians will manage to cut rising unemployment among foreign-born residents. However plenty of these voters are the very same people who've given record donations to asylum charities in recent months.

Sweden is feeling the full force of its decision to welcome its highest number of immigants in history in 2015. Opinions are fragmenting. But the country is not broken.