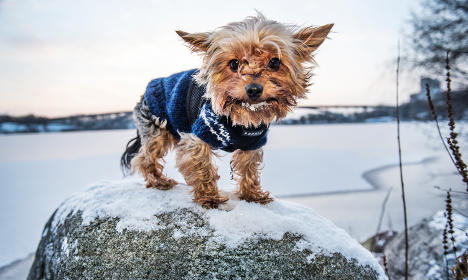 The class-one alert (which is the lowest kind, on a scale from one to three) warned of wind speeds up to around 20 metres per second in central and western parts of Sweden during the day.

It also added that the water level had already risen along the west coast overnight as a result.

Meanwhile it predicted that southern Sweden and the Baltic Sea region could expect winds of on average 14 metres per second.

“It gets very windy over the whole of Tuesday. It won't slow down until during the night between Tuesday and Wednesday,” Daniel Fredriksson, meteorologist at weather agency Storm, told the Expressen tabloid.

The E6 motorway was closed overnight for heavy traffic at the Uddevalla bridge in western Sweden, but reopened just before 6am. Some minor roads were also blocked by falling trees.

On Tuesday morning trains between Borås and Varberg as well as Uddevalla and Strömstad were also cancelled and replaced by buses.

WEATHER: The forecast where you are in Sweden

The windy weather comes just two weeks after western Sweden experienced its heaviest snowfall in recent years, including 33cm of snow in less than eight hours, public transport woes and a penis drawn on a frozen moat.

Last month also clocked up a new millennium record, with -42.8C measured in Naimakka in the far north in January, the coldest temperature since 1999.

However, after the mercury climbed again to above freezing in southern Sweden over the weekend, it looked like the month would on the whole not claim any new frozen records, according to preliminary figures released this week by SMHI.