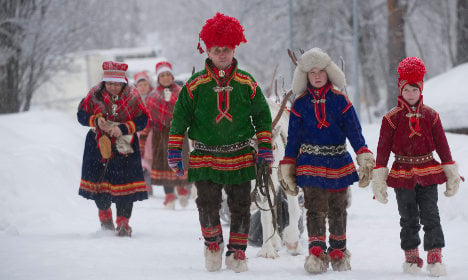 Stock picture of people wearing Sami clothes. Photo: Fredrik Sandberg/SCANPIX
The church on Friday released its two-volume “White Book” which painstakingly details its treatment of Sami people, in particularly dwelling on the chain of ’Nomad Schools’ it operated between 1913 and 1962.
“It was a form of school whose ideology was based on racist ideas of superior and inferior races, and that took away from many Sami their language, culture and human dignity,” Archbishop Antje Jackelén told Sweden’s Dagens Nyheter newspaper.
She said the book was part of a “reconciliation process” between the church and the Sami, many of whom are Laestadian, part of a highly conservative Lutheran Christian movment.
“One must describe where the pain persists, and what the abuse was,” Jackelén said.
The driving force behind the Nomad Education Reform, the then Bishop of Luleå, a city in the north of Sweden, believed that reindeer-herding Sami should keep as much of their original way of life as possible, while other Sami should be assimilated into the rest of the Swedish population.
As a result, the boarding schools intended for the children of ethnic Sami reindeer herders had a much simpler curriculum, as the herders were not expected to be able to reach the same level as ethnic Swedish children.
The facilities were also generally very basic as the Church believed that too much exposure to “civilisation” threatened to harm Sami culture.
For example, the accommodation huts at a school in Killingi village built in 1920 and continuing up until the 1940s were furnished with twigs and reindeer skins.
The lessons were given in Swedish, even though many of the pupils hardly spoke the language.
Lars Levi Sunna, 72, from Kiruna, was forced to go to a nomadic school in the 50s.
“It is good to take the troll out into the light, because then they disappear,” he said.
“There’s been a silence surrounding this. Young people do not know what happened. The nomad school were found throughout the Sami regions, from Karesuando to Jämtland. We must talk about it.”
The church’s suppression of Sami also saw Sami family names cut from church records and a ban on traditional Yoik singing.