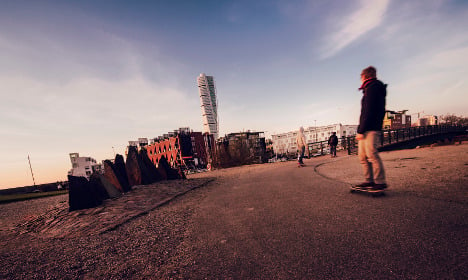 Malmö has not had the easiest year, including a summer of violent grenade attacks and border ID checks ordered by the Swedish government, causing delays for commuters and tourists travelling between the city and Copenhagen via the famous Öresund bridge.

But it's not all doom and gloom. Sweden's third biggest city is in fact Europe's seventh happiest, according to a recent survey by the European Commission, with 60 percent of respondents saying they are “very satisfied” with their quality of life and 36 percent saying they're “satisfied”.

It even knocks the Swedish capital out of the park, which ends up in 16th place with just over half of Stockholmers saying they are “very satisfied” with life in their city.

While the survey lists options like 'healthcare services' and 'satisfaction with infrastructure', here at The Local we would like to suggest some alternative reasons which may explain why people in Malmö are so damn happy.

1. The food scene is excellent

Malmö is an until-recently hidden gem on the Swedish culinary scene, but it's quickly catching up with neighbouring Copenhagen's famously delicious eateries. In February 2015, three restaurants in Malmö were awarded a Michelin star, with one head chef becoming the first woman in the country to score the honour. And if you're short on cash, the city's got the best falafel rolls in Sweden for less than 25 kronor. Something for everyone.

2. Malmö is a super-green city

While Stockholmers are still walking around shivering in the February chill (with sacked Chelsea boss José Mourinho saying he wouldn't survive any further north), southern Swedes have already begun to shed their winter coats and post pictures on all available social media of spring flowers popping up. Come summer they'll all be flocking to Malmö's own Ribersborg beach – one of the near-tropical beaches you would almost not believe are in Sweden.

We're referring, of course, both to the Nordic Noir television series of the same name (the coolest cop heroine of all time, Saga Norén, lives in Malmö's posh Västra Hamnen district) and the actual Öresund bridge connecting Malmö to Denmark's Copenhagen. As we mentioned earlier, the latter has had some bad press lately, but it is still the closest you get to another European capital in Sweden. While most of us have to plan in advance if we want a mini-break abroad, in Malmö you literally just hop on the train.

5. Zlatan is from Malmö

Sweden's star striker Zlatan Ibrahimovic has famously said of the Malmö suburb where he grew up that “you can taken the boy out of Rosengård, but you can never take Rosengård out of the boy”. The forward certainly put a smile on many Malmö residents' face when he booked up the central square to show his PSG's Champions League clash with local team Malmö FF – dampening the blow when the latter got knocked out of the tournament.