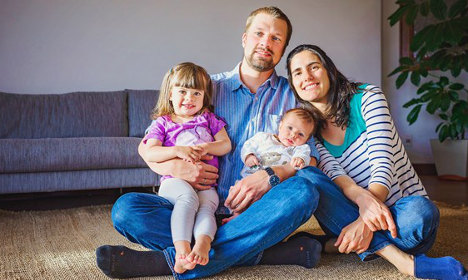 In the last two years the average waiting time has more than doubled for some groups trying to get their residence applications approved by the Migration Agency.

People classed as having a so-called “newly established connection” to Sweden have seen the processing time for their case rise from 153 days in 2013 to 378 days last year, the news report said.

Anders Backman met his wife Irene Castillo, who is from Bolivia, when both were working in Norway in 2009. They now have two children together.

But the pair ran into trouble when they moved to Stockholm last year after a stint in Bolivia.

Migration officials first told them Irene would have to apply from Bolivia and that the process could take up to 14 months. They ruled this out as they didn’t want to be apart for so long and instead applied for and received a tourist visa.

Then, in November last year, Irene applied for residency and the couple were told they would be called to an interview in February or March this year. They were happy with this outcome but when Anders Backman contacted the agency a few weeks ago for an update he was told that they would now have to wait at least a year for the interview.

Backman said he understood the agency had to vet couples to weed out fictitious marriages but argued their case was clear-cut.

“You can’t be a fictitious parent with fictitious children. The situation is extremely stressful for us,” he told The Local.

For now Irene Castillo remains outside the system and is not covered by the country’s extensive health insurance system.

“We could face financial ruin if we have to call an ambulance,” he said.

“My wife can’t even visit her family in Bolivia for fear she won’t be let back into the country.”

Irene Castillo is currently on unpaid maternity leave with the couple’s youngest child. Without a personal identification number she won’t be eligible to work when she’s ready to re-enter the job market.

“This is putting us under a lot of financial pressure,” said Backman.

The agency has a backlog of some 53,000 people trying to move to someone already living in Sweden, Sveriges Radio said. This figure includes people waiting to have adoptions approved or bring their family members to Sweden. But it also encompasses some 26,000 people applying for residence permits to be with their partners.

“I'm sorry that it has come to this,” Martin Norlén, a departmental head at the agency's offices in Gothenburg, told Sveriges Radio.

“But at the same time we can't just sit and twiddle our thumbs and refer back to the autumn [when refugee numbers soared]. We have to look ahead,” he said.

“It may be the case that we increase the available resources.”

Sweden launched controversial identity checks at the border with Denmark on January 4th in an attempt to stem the flow.