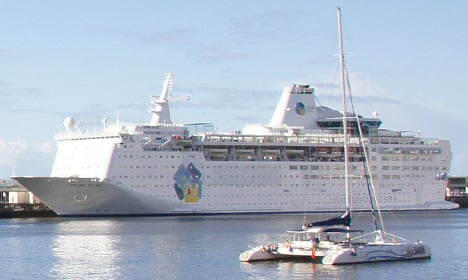 In November The Local reported that Migrationsverket was hoping to use cruise ships to ease a housing shortage for the record number of people who have travelled to the country in 2015.

The refugee influx has eased since, but authorities are still working to find long-term accommodation to where they can transfer people staying at emergency housing centres for asylum seekers.

Swedish tabloid Aftonbladet has revealed that one of the contractors which has agreed to provide floating accommodation for the agency, US Shipmanagers, has applied for planning permission to dock the ship, The Ocean Gala, in Härnösand, on the east coast of northern Sweden.

“We don't have any opinions about where it is. It's all about finding a harbour that suits,” Migrationsverket spokesperson Willis Åberg told the daily newspaper.

However, local councillors are opposing the bid due to the size of the ship – which would become Sweden's largest accommodation hub for asylum seekers if the plans go ahead. The contract will be binned unless a space at an appropriate port is secured within two months.

“The building of housing for 1,000-1,800 people should be preceded by proper planning, even if the installation is of a temporary nature,” Fred Nilsson, who represents the centre-left Social Democrats on the Härnösand council board, told the TT newswire.

The Ocean Gala was built in 1982 under the name MS Scandinavia, sailing between New York and the Bahamas. She was later sold to Thomson Cruises and operated for many years as part of their fleet in the Canary Islands and Mediterranean, then known as MS Island Escapes.

At more than 185 metres long and with a 26,747 gross tonnage, she was the world's biggest cruise ferry at the time of construction.

More than 160,000 people sought asylum in Sweden in 2015 and another 100,000 are expected to arrive in the country in the coming year, according to Migrationsverket.