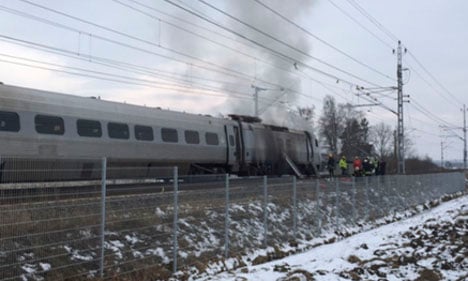 Fire crews were called to the blaze on the X2000 high-speed train which connects Sweden's two largest cities on Friday afternoon, after staff on board raised the alarm.

According to the TT news agency, the train was forced to make an emergency stop just outside Skövde station in central Sweden. Commuters and tourists on board were told to evacuate the train without collecting their luggage.

One traveller speaking to Swedish tabloid Expressen said that the X2000 had been stationary for 10 to 15 minutes before those on board were told over a loudspeaker that “something was wrong”, an announcement that coincided with them spotting smoke billowing outside the train's windows.

A spokesperson for the region's fire and rescue service told Expressen that the blaze was believed to have started in the driver's cabin and confirmed that flames as well as smoke had been discovered.

There were no immediate reports of injuries.

“The information we have been discussing is about smoke in the train. Passengers have been helped with their evacuation and there is no forecast for how long the suspension [of services] will last, says Roger Falk, a spokesperson for the Swedish transport agency told TT.

The fire had a knock-on effect on other travellers attempting to get home for the weekend as well as those hoping to enjoy an early break.

The Local's Paul O'Mahony, who was also travelling towards Gothenburg from Stockholm on Friday afternoon using a different train provider, said that his route had been brought to a standstill.

“They don't seem to know when we are going to get going again,” he said.

“Everything is at a standstill. It's difficult, especially for families with kids.”