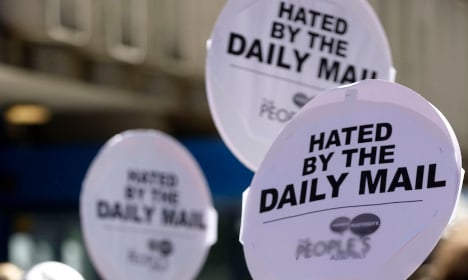 “Sweden is being used as a deterrent and an argument against allowing more refugees into the UK,” said the embassy in a report to the Swedish Foreign Ministry, quoted by TT.

Now the embassy is to try to counter the negative coverage by working with Swedish organisations in the UK, the agency said.

“The tabloid Daily Mail has launched a campaign against Swedish migration policy,” the report that was sent to, among other people, Swedish State Secretary Hans Dahlgren is understood to say.

The embassy is also said to have noted that the digital arm of the tabloid, MailOnline, has a very wide reach and that the stories about Sweden have received many racist remarks in the comments section of the website.

“The Daily Mail characterises Sweden as naive and an example of the negative consequences of a liberal migration policy.”

The Daily Mail is a right-wing UK tabloid newspaper renowned for taking a vigorous anti-immigration stance throughout its 120-year history. Its circulation in the UK is second only to The Sun.

More than 160,000 people sought asylum in Sweden in 2015 and another 100,000 are expected to arrive in the country in the coming year, according to the country's migration agency, Migrationsverket.