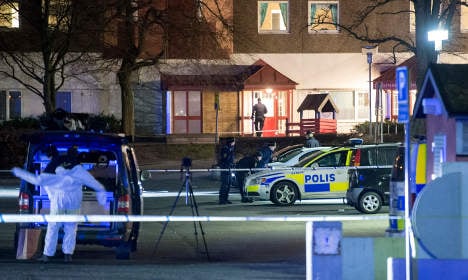 A man was found dead in Malmö. Photo: Johan Nilsson/TT

Witnesses said several gunshots had been heard at around 1.30am on Monday morning.

“A number of people have phoned in in connection to the incident itself and we have also knocked on doors and taken other similar measures in the area,” police control room officer Magnus Lefèvre told the TT news agency.

Officers arrived at the car park in the Lindängen suburb Malmö to find a man dead next to a car.

A large area was cordoned off while forensic teams searched for evidence.

“We're investigating the victim to be able to identify who this person is and what could be the background to this incident,” said Lefèvre.

Regional newspaper Sydsvenskan later reported that the victim was a 30-year-old man previously known to police and was believed to be linked to gang violence in troubled areas of the southern Swedish city.

Nobody had been arrested by 11am.