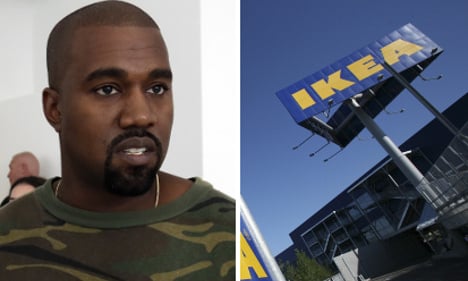 Kanye West snapped in the US last year (left) and an Ikea store (right) Photos: AP/TT

Kanye West was spotted visiting Ikea's most famous design store just after lunchtime on Tuesday, with news of his unexpected visit quickly dominating the headlines in Sweden's tabloids.

“That's right, we can confirm that he is there. I don't want to and can't say more than that he is in Älmhult at Ikea today,” press officer Jakob Holmström told the Aftonbladet newspaper.

And now for something completely different: Kanye is at IKEA in Älmhult. Swedish media is going nuts.

Welcome to @Sweden and IKEA in Älmhult @kanyewest ! You are now truly a Swede and we welcome you to our community.

Aftonbladet said that the superstar had been given a tour of the company's headquarters, which have been based in Älmhult for more than 60 years.

The newspaper suggested that West could be talking business with the Swedish furniture giant. He is known to be friends with designer Kate Eary, who has already worked with Ikea.

The hip hop artist, who turns 39 this year, has already launched numerous entrepreneurial ventures including his own clothing line, a collaboration on a shoe range for Adidas and a burger chain.

There were no reports of his wife, Kim Kardashian, being spotted in the area.

West is not the only rapper to have taken a shine to Sweden recently.

Wyclef Jean fell in love with Sandviken after a gig there in 2013 and last year told a Swedish tabloid that he was planning a move to the town.